As an absolutely mental 8 player game, Knight Squad sits on an awkward knife edge depending on what you’re after and how many people you’ve got around to play with. A range of play modes and different knights to control has a positive initial vibe, but a lack of depth soon becomes an issue.

Every stage in Knight Squad takes up the screen in a top-down view that means there’s no scrolling and everything is visible at all time, assuming your eyes can keep up with the action. Having chosen a knight from one of the various very nicely designed options, you’re met with a series of possible game modes which range from the slightly more common options like deathmatch and capture the flag, through to slightly more off the wall options like soccer and a deathmatch-style game where each kill presents you with the next most powerful weapon, until you’re running around with a laser gun zapping opponents who are riding around on horses. The variety is pretty decent, but the games themselves can degenerate into an exercise in short-lived patience and inevitable frustration.

The big issue is that while you’re trying desperately to grab the Holy Grail, or chase a knight with your nice new sword, or whatever you’re trying to do, there are 7 other minuscule knights that all look pretty much identical that will happily chop you down with a single hit from whatever their weapon is. With some long distance weapons like the bow and arrow or laser gun, you can get picked off from half way across the level, and you’re dead in one shot. As such, actually getting anywhere to do anything is almost impossible, even if you’re only playing against the bots on the easy AI setting. It’s no coincidence that I’ve played several capture the flag games against seven AI knights, and they’ve all ended in a ground-out 0-0 draw. Even with a whole team charging together, one well placed bomb will wipe everyone out and return the flag back to square one. It means the action is frantic and fast, but also means the chances of actually doing anything worthwhile is very slim. 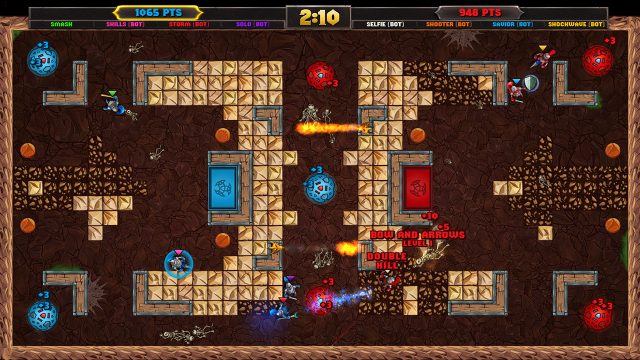 Let’s not forget though, this is a game that’s designed for local multiplayer, which means if you’re playing on a Switch Lite you’re not going to get the most out of what Knight Squad has to offer. You’re far more likely to enjoy this if you’ve got people in the same room to shout at for messing up your game, or for letting the team down. And yet despite this lean on multiplayer, there’s an option that’s very prominent on the main menu to just pick some options and let a whole group of 8 bots get on with it, for you to… I don’t know, watch? I’m not sure what this is even for, maybe it’s to let you see how the game modes work, or to make you feel like you’re watching an e-sports event… Either way, it’s a really odd thing to include, and not something you’d expect to see.

Your enjoyment of Knight Squad depends if you can get enough people to play together at once. If you’re playing alone, then you’ll have to make friends with the AI and you probably won’t really spend much time with it. But with some friends on the sofa, that are close enough to throw insults at when things go wrong, you’ll get some good fun out of this. Chances are though that however you play this isn’t something you’ll spend hours playing, and while having another decent party game on the Switch is no bad thing, I’d find it hard to recommend this unless someone specifically asked me to suggest an 8 player crazy game where nobody’s lack of skill is punished, and everyone has a chance to be a pain in the backside.