Back in 2005, Destroy all Humans! gave us comedic aliens invading earth and lobotomising all humans. In 2020, that concept feels like a lovely respite from the dumpster fire that is real-life 2020, which is perhaps why they’ve decided to stay away.

Never mind though, as Destroy All Humans! is the latest game to be remastered for the current generation. I enjoyed it the first time round and all the feels of the original came flooding back to me as I sunk my teeth into the new version.

It wears its heart on its sleeve. You play a numbered clone of an alien, named Crypto, and it’s your job to head to earth to recover some brains in order to gather precious fuel for your race. Two things struck me initially; how good the remaster looks, and how terribly dated it sounds.

Let’s start with the good – updated visuals really help the cartoony style of Destroy All Humans! really pop. The world is vibrant with each level as a mini-open world sandbox which affords you some freedom to explore but with being able to drastically change the scene between levels without a long travel or unexplainable transition.

The sound itself is fine, it’s the voice acting that’s the trouble. I remembered the cringe of the original as soon as Crypto talks – he sounds like some film noir detective with an attitude, a terribly miscast lead voice artist for this game. There are a lot of laughs in the game but almost none from Crypto. Having a badly voiced main character is probably worse than the classic mute. I suppose it’s a matter of personal preference but if you can imagine how an alien might talk in English – it isn’t this. 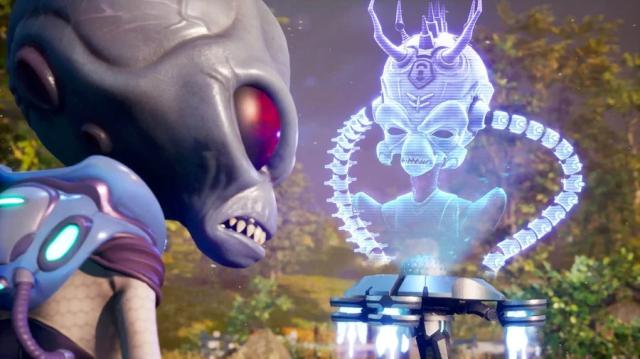 You can soon forget that though as you start running about and killing everything. Aiming is basically an acknowledgement here as your electric laser beam and brain-absorbing rays just latch on to whatever is near. You can pick up and throw things – in fact you feel very powerful almost instantly after you learn the basics by killing a load of cows by tossing them around.

It all quickly feels a bit one-trick pony if I’m being critical. Run about, kill everything easily, continue. That’s sort of the point I guess, it’s just mindless fun and should be commended for that. The AI just sort of runs at you which fits in with the ‘mowing everything down’ theme.

I had to check for new content as I couldn’t remember all of the levels from the original, and there is a brand new area where you have to steal America’s attempt to build their own UFO. This is pretty cool and fits in nicely to the game without being an obviously new addition. I wonder why it wasn’t included in the original, or if it was a genuine attempt to create something new for this remaster.

Destroy All Humans! is a fun game. It’s not overly complicated and doesn’t overstay it’s welcome, and as a nostalgic blast from… 15!! years ago it’s also a nice little throwback on the cusp of another new generation looming.