It’s the Moon, Jim, but not as we know it. We’ve had quite a few games based on the Moon over the last few years, but it tends to be a “real” idea of how it would look: bleak, dusty, and grey. Very very grey. Relicta turns that round by setting things in a futuristic version of the moon where they’ve figured out how to give it at atmosphere with trees, water and other such Earthly niceness, providing a quite unusual backdrop to what quickly becomes a brain-twisting puzzle game of magnetism and gravity.

The story revolves around a physicist called Angelica who is based on a base on the Moon, and experimenting with a device allowing her to mess around with gravity and magnetism. Having experimented with the cool things the device can do, we skip to an unknown event that rips into the base and causes absolute havoc, wrecking the place a fair bit and separating the crew, which just so happens to include Angelica’s daughter. Information about the fate of the crew is sketchy, pulled together by various radio conversation as you make your way through the various experiments that are still ticking over from before the incident, allowing you to make your way around the base and try to help the crew. 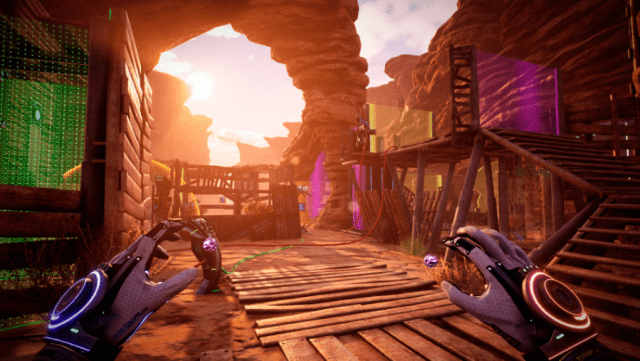 So you’re in a broken base, trying to get yourself through a series of physics based experiments by messing around with magnets and gravity, in order to get to where you need to go. So far, so Portal 2. But Relicta isn’t a simple copy of Portal; the story itself is worthy of merit, building slowly throughout the game, with the conversations over the radio making things appear more and more bleak for the lost or trapped crew members. It keeps you hooked in throughout the challenges, and is definitely worth seeing through to the end.

The puzzles themselves are a bit of a mixed bag, and consist of trying to move a series of coloured cubes around the area to try and shut down the force field blocking your way to the next area. They all give the same feeling of satisfaction when it all falls into place, but figuring out where the cubes are what you need to do with them can lead for a fussy and frustrating few moments, especially when your character is limited by what they can do in terms of jumping, ducking and so on. The cheap barrier trick is strong in this one. The other issue that seems to crop up sometimes but not others (which makes it all the more annoying) is when you need to propel a cube through the air, which is a really awkward thing to do and doesn’t give you consistent results. Trial and error isn’t even a useful option, considering the rules for how a cube lands or bounces don’t seem consistent with themselves. But there aren’t many moments when this rears its head, and as such you can enjoy the game for what it is: a fun, well written and occasionally baffling puzzler that doesn’t quite hit the heights of Portal, but still carries itself as a worthwhile game that fans of this genre should be all over.