It’s only Rutger bloody Hauer! He’s in the game! You play as him!

Sometimes slow paced story games don’t really hit the mark. Observer absolutely gripped me from the off with its futuristic, cyberpunk styling, detective investigation and amazing voice acting by Rutger Hauer (and others).

You play Rutger who himself, is playing Daniel Lazarski in 2084. A detective with some cybernetic enhancements (which make detecting a bit easier), Observers have these enhancements to help hack the minds of suspects who, in a world ravaged by war, live alone in isolation behind screens, locked in their rooms. Sounds a bit like my life these days…

Anyways, one day you get a call from your son who is in a state of distress. As you go to the crime scene, you get a real sense of what Observer is about. The atmosphere is dripping, everywhere. The rooms, and potential crime scenes are puzzles, requiring you to move bits and pieces around. Cupboards, drawers and the like can be moved by holding a trigger and moving a stick (not dissimilar to my recently reviewed Amnesia: Rebirth). It’s fluid, and works nicely.

Flicking between your views are essential to solve the puzzles. In the first crime scene you see, you’re using your biometric vision to see blood splatters and signs of life. Electro vision will show hidden cables, and mechanical devices that may lead you down certain routes, and this is essential in order to unlock a hidden door. At times it felt like a futuristic, slightly horrific escape room. I loved it. 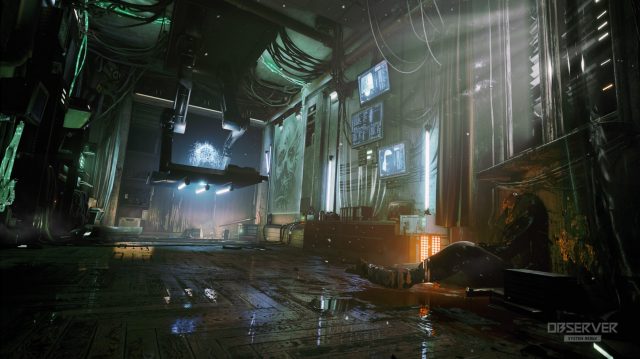 Observer: System Redux is actually an enhanced version of Observer from 2017. Having not played the original I searched for some comparisons – and wow; it looks great. Enhanced for next-gen consoles, ray tracing jumps out immediately. Reflections in puddles, the neon lights glistening through the rain – just wow. I was continually impressed, and it definitely adds to the atmosphere

Things get really turned up a notch as you venture in the minds of suspects. Crazy, terrifying effects look next-level scary. The 3D audio (using Dolby Atmos processed on the Series X through stereo headphones) is amazing, and I can imagine the PS5’s sound is equally as good. There are some stealth sections that can involve your death, but fantastic definition between various shadows, and directional sound really help manage this. I’m a ‘headphone gamer’ anyway, but if next-gen consoles can produce this quality level of sound, it’s going to be essential.

On top of the enhanced visuals, the new version offers some side-missions which are actually so well integrated into the game I didn’t realise until afterwards that they were side missions. There are a few different cases to work through overall, but I didn’t feel like it overstayed it’s welcome. It’s made me even more excited for Cyberpunk though, if it’s anything like this. One cool effect also is the need for your character to take his medication – this sounds trivial, but it adds an overarching tension to the whole thing, and makes the tension feel more insular.

There’s lots to unpack here surrounding the augmentation of humans and morality in the near-futuristic world. Without wanting to delve too far into it, you’re encapsulated in a  fantastic story game here that does not outstay its welcome, whilst also doing a reasonably decent job of showcasing the features of new consoles. The PS5 version goes a step further by using the haptic and tension triggers to simulate things like locked doors. Recommended.