That’s all I needed to hear about The Falconeer, launch title for next-generation consoles. It was on my wish list. What do you do? Who cares. Giant falcon, right? Luckily for me, it’s actually a very good game as well.

But what it isn’t, is what I thought it actually was – an aerial dogfighting game. The game is divided into chapters, each one a different world which has a different home base, and this fleshes out the story over time. Each is an open-world, where you pick up missions to either further the main story or complete side-quests (kill this, defend this, deliver this) to get some cash to upgrade your weaponry or bird (or buy a new bird).

Sure – the crux of the solution to the story problems is to shoot things, and that is done through aerial-combat. But this is a surprisingly weak part of the game. You have one weapon, a mini-gun (which can be upgraded) and that’s it. You shoot at things till you run out of ammo, replenish ammo by flying into a lightning storm (long story) and then fly back and shoot some more. There are no lock-on missiles to fire. Enemies still go down in a flaming heap (I guess something on the birds catches fire) but there are no whizzing missiles and grand explosions akin to that.

Combat evading then is also simple. You can roll, dive and air-break. That’s it. There are nuances to it, but ultimately it’s basic and simple, doing the job, with a fairly generous lock-on system too. You can use your talons to pick up bombs and drop them when you need to attack land or sea targets, but machine-gunning also works. 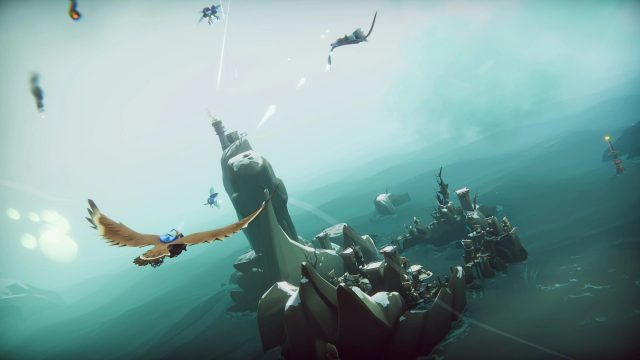 Where the real beauty of Falconeer sits in, is all of the stuff around it. The open-world is lush, sedate, calming, and stunning. Going from place to place is tranquil, and you then realise that this is part of it all. Unbelievably, The Falconeer is designed by a one-man team, so you’re getting the true vision of what a person set out to achieve here. You should spend a few minutes gliding to drop off this package, admiring the sunset, listening to the waves as you fly, and maybe catching something interesting flickering in the ocean.

This greatest asset is also its biggest flaw. Consequently, the pace is slow. Frustratingly slow to begin with actually, as you need to take some time to upgrade your bird enough to be competitive for later missions to progress the stories. There’s a reasonable tutorial but it doesn’t really prepare you for how you are intended to play the game, and only by persevering does it become clearer that it’s not the run-and-gun dogfighting sim (but with birds) that you thought it was. It’s much more than that.

Did I mention it looks stunning? I did. Well, it really is. Characters and buildings have a near-blocking effect, giving it a rustic, cell-shaded-ish feel, borderline cartoony, with some near-comically animated characters. It all fits together nicely, and given most of the world is covered in water, draw distance with the power of next-gen machines is not limiting, with the constant movement of the ocean below you providing a truly epic backdrop.

What a launch title then for Xbox Series S and X. It’s an original IP, by a one-man team, yet it sits proudly in the starting lineup holding its own against the big guns. Quite frankly, I can’t recommend it enough.