Ponpu is certainly very intriguing. The visual style immediately catches your eye, a white and sepia top-down style, although the story will make your head scratch.

There are different ducks to choose from, and a god Duck, a mystery duck – there’s a lot of duck related stuff going on. You quickly realise that this appears to be a successor of sorts to Bomberman, although dropping bombs to blow stuff up (and the top-down style) is where it starts to deviate.

Instead of bombs then, you drop eggs. Which explode. So basically bombs. But you also have a special egg which you can drop outside of the normal ones, which can vary from remote detonation to actual protection. As the story begins, there are a number of puzzles to complete before you can move forward. Blowing everything up is basically the solution, but it’s not as easy as it appears.

Enemies free roam, as do you – and rather than bombs exploding in a criss-cross format (like Bomberman), there is a circular radius. As they’re moving, trapping them is super hard but thankfully you can kick the eggs. You also have a shield, which can act as a parry for eggs kicked against you, or a dodge depending on your timing. It also serves to stun enemies, so a combination of these skills have to be used in order to blow everyone up. 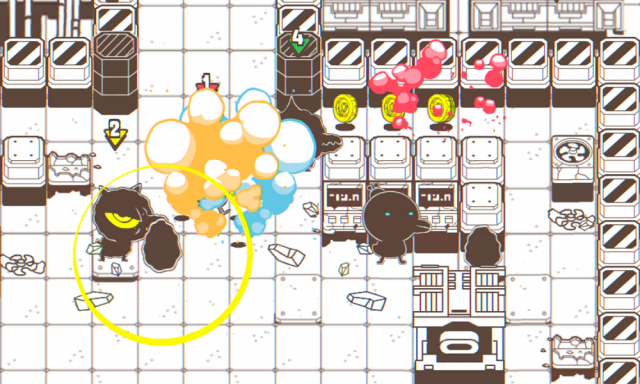 There are keys to find in order to progress through each world, and it does become a bit of a slog eventually as you’re just blowing up everything in order to find them. Thankfully, your bombs (and ability to kick them) mean you can blow up multiple ones at once, thus speeding this process up slightly.

It’s a bit of a shame that throughout the campaign, this sepia and white colour way doesn’t deviate massively. There’s a lot of excitement to be had with a splash of colour, but outside of the multiplayer it’s not used as widely as it could be.

Multiplayer makes things a bit more interesting, my favourite being the paint mode. With your eggs, kicking them in a line paints the level (as well as damaged enemies) so maps quickly become bathed in purple and orange. Think of it as Splatoon, and you get the gist. Other modes involve grabbing coins, smashing things up – and they’re ok, but when you’re teasing similarities to a classic, you have a hard job ahead of you to not just be reminding people that they’d rather be playing the aforementioned game.

Ponpu is a weird looking game, that starts off interesting and quickly becomes less so. There’s an appeal here but I don’t think the developers have quite done enough to really hold your interest after capturing it initially.