If you haven’t heard of Overcooked by now, then that’s quite an achievement. The incredibly popular Chef-Em-Up (it’ll catch on) has spanned two games and numerous DLCs, and if you’ve got at least one other person to play with the fun and tension is sky-high. Taking the role of a chef (and I use the term loosely, you can be a crocodile in a chefs hat here if you want) you need to work together to prepare and serve meals as the tickets appear in the top left corner of the screen. At first this seems simple enough. Onion soup? Easy. Chop the onions, chuck them in a pan, then serve it when cooked. Then the realisation… “hey, we can work together! You chop the onions, I’ll cook and serve them…”

That goes smoothly for roughly 1 and a half levels.

But I’ll come back to that. All You Can Eat is a collection of both Overcooked games, completely remade for the new consoles to give sparkling 4K visuals running at a rock solid 60FPS. Nice. Loading into any of the 200-odd levels is almost instant, and the chaos starts from the first moment of trying to work out how the hell to cook this burger that’s just been ordered. Other added features include improved multiplayer, with even cross-platform online games available. That’s a very cool addition, because this is a multiplayer game through and through.

And that’s because you have to be so incredibly organised to succeed. I watched a video of two professional chefs playing this once, and it was amazing. They were totally in sync, nothing got wasted, nothing caught fire, everything got delivered on time… and yet when I try with my son, we’ve got burgers burning the kitchen down, fish being dropped in the sea and meals being served that never even got ordered. And every moment is a perfect mix of frustration and hilarity. I think, to be honest, Matt said it best in his Overcooked 2 review: 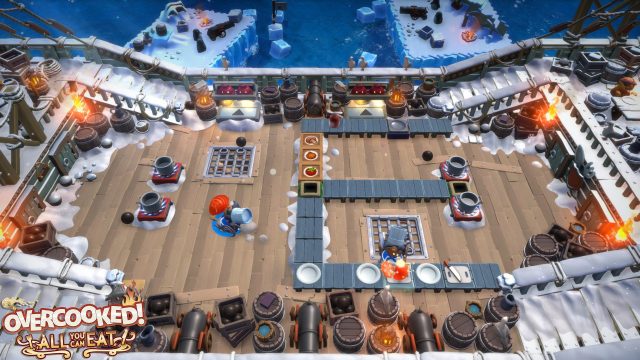 The game looks gorgeous now; the colours are bright, the environments around your kitchen are fantastic and varied and everything moves with a wonderful slickness. The sound, too, deserves a nod, with a mix of urgent kitchen noises, bustling backgrounds and various pings to tell you when you’ve done something well, or a buzz to show you’ve buggered it up a bit. It’s such a great overall package, and so well put together.

So this is an ideal time to jump in if you either missed an Overcooked game, never really got to play it because of the local multiplayer limitations (fixed now, as I mentioned, by the cross-platform online play) or just want everything in one handy package for you to fire up and test your kitchen skills for a while. It’s not a game to play alone, so if that’s your only option then steer clear, but otherwise this should be living on your nice new shiny console.