In Assassin’s Creed Valhalla, you play as Eivor in a sprawling, open-world. If you’ve played one of the previous entries in the recent era of Assassin’s Creed games then you’ll know what to expect here. If you haven’t though, let me explain.

The pinnacle of the Ubisoft ‘open-world-by-numbers’ now, Assassin’s Creed throws masses of different mechanics and things to do into a huge world, to which you can effectively go anywhere. The world map is uncovered as you explore, and seek out towers which are climbed and reveal points of interest in a nearby area.

There’s an over-arching narrative, but it stems from an age-old rivalry between the Assassin’s and the Templars. There’s a lot of lore here, and it’s referenced in every game – in essence, the Templars are bad or something, and the Assassin’s are out to kill them all. Who knows. It takes itself very seriously, but much more interesting to me (as has been the case in all of the Creed games I have played) is the local story told in the world – in this case, Vikings.

You play as Eivor, who can be either biologically male or female (you cannot have male biology referred to by a different gender pronoun) but the fact you can choose either is a nice step. I chose male, although I think a badass leading female Viking would probably have been cooler but there you go – if you can’t decide, you can let the animus decide for you (more on this later). Eivor’s clan is attending a feast, when Kjotve the Cruel rocks up and kills his (I’ll refer to Eivor as ‘him/he’ in this instance as that is my Eivor) family.

Adopted by a friend’s family, years later Eivor is seeking revenge on Kjotve and as rival Kings begin to take a stronghold on Norway, makes way to England where the majority of the game is set. My first surprise here was that despite the start being positioned in the Fjords of Norway, it is a massive area and I spent over five hours there (and still had things left to do). It is absolutely insane that as you embark for England, you get the title screen for the game after FIVE HOURS. That gives an indication of how big this game is.

Assassin’s Creed games can be summed up as combat and parkour. Combat is fairly robust but pales in comparison to recent open-world games such as Tsushima (which is similarly simple but with more finesse). You have light and heavy attacks, block, dodge, parry and arrows. It works, but I’d be lying if I said it was brilliant. Passable to good maybe. The parkour element is brilliantly and seamless implemented, holding a button lets you run, jump and leap from buildings to pillars to wires.

Upon this foundation is built the world. One-on-one combat encounters turn tactical, and massive Viking raids are absolutely insane. Loads of bodies on screen, fighting. Early on, whilst still in Norway, you raid a castle. Ladders go up, people all around are fighting, walls get breached – it’s like something out of Helm’s Deep. I played on Xbox Series X, and the enhanced version looks fantastic and is super smooth – although even on 1080p there is frequent screen-tearing. It’s since been patched however and this has improved dramatically.

There’s an awful lot of stuff to do. Missions are the linchpin – talking to people, going places and carrying out tasks, be it fighting, killing, collecting. There’s a lot to stumble across too, one of my favourites was a Viking couple I found, well a lady outside her house complaining about her man. They first, errr, got together during a raid, amongst a building on fire, very passionate! Since then however, nothing really gets them going. So she hires you to smash up their place while they’re in it to replicate a Viking raid and arouse her partner. It doesn’t quite do the job, so she then asks you to burn it to the ground. You do this, and make your leave as they make… well you leave anyway. Random…

In various towns, you’ll encounter lots of things to do. Viking rap battles apparently were a thing, and you can do these with people – picking the right sentences to carry out the rhyme and beat is important. There are drinking games, parkour challenges, a million different collectables and smaller side-story missions, tattoos to collect and customise your character with – along with tons of different armour and weapons. 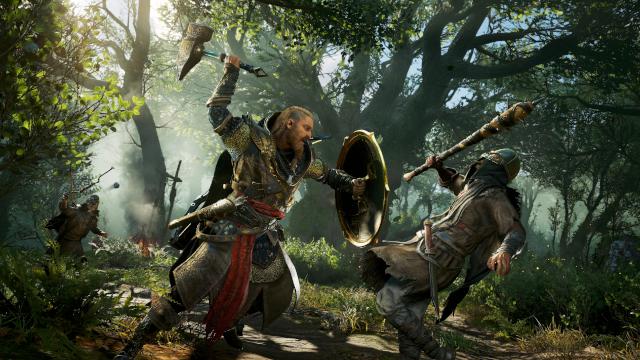 Aside from visually looking different, armour and weapons can be upgraded, enhanced with runes or just give you a new gameplay style. I was using my axe for ages which was fairly short-ranged but fast and moved along to a mace which had better range but was slower – although brutal. There are combat special moves to power up (such as being able to throw dual axes) and a seemingly endless skill tree. It’s heavily RPG-vested, one upgrade may give you 3.4% increase in stealth attack damage. I found this really overwhelming, still do, and just randomly plonk points down now to build myself up.

All of the visual customisations can be shown off in the photo mode, which truly does show how good a game it looks. If I’m honest, I did sort of prefer the scenes of Norway rather than the English countryside – aside from the accents, I’ve never really felt like England is the most existing setting for a video game, but this is a personal preference.

My favourite way to play is with stealth, but you can really approach scenarios however you want. An ability lets you detect enemies, and then balance your attacks from above, below, from hiding in bushes, and using an assassin’s cloak, even hide in plain sight for stealth kills. You can very much approach the game however you wanted to, and the stat-upgrades along with the visual and weapon customisation really help this.

I mentioned the animus earlier. The animus is a machine whereby people in present-day (or close to) can matrix into a visualisation to relive the memories of the character you are playing. I hate this bit in these games, it’s really jarring and I don’t think it adds anything – but if you are invested in Assassin’s Creed lore, then it will mean something to you. Every time I was forced to back out and play as a modern character, I lost interest and it just acted as a serious break in momentum for me.

One thing that is brilliant, however, is the sailing. Viking longships are epic, and barrelling along the ocean before you pillage something, telling stories or singing shanties is just fantastic. It reminds me of Assassin’s Creed IV: Black Flag (the pirate one) – my favourite of the last era of Assassin’s Creed games. It’s another example of this game offering everything, you can go from a boat simulator to full-on combat, or a countryside ride on your horse, to Sim City as you build out your settlement – shopping and planning your building with the appropriate materials for it to flourish.

There are absolutely masses to do in Valhalla. It’s a huge, huge game, and I enjoyed the vast majority of it. Disclaimer: I’ve still not finished it, but am many hours in and can see myself playing it for many more hours. As one of the first ‘next-gen’ titles, it very much does feel like it’s made for the new consoles and meant to be played on them. It’s the only game on Xbox Series X that I played and thought ‘Yep, this is next-gen gaming’. Thankfully it’s a decent enough game in its own right also.