In reviewing previous MX games, I’ve talked about the ‘flow’. This rhythm of going over jumps, perfecting timing them to get the right vertical lines, maintaining speed, and flicking your bike around turns and how great it feels. It feels equally great in 2020, better than last year’s version, but a no-frills barebones skeleton around solid gameplay makes me wonder if they just ran out of time.

Firstly, make no mistakes – the gameplay here is great. Last year, the MXGP edition was sketchy. Fully featured, but something just felt a bit ‘not right’ with the handling and lost some of the finesse from the year prior. 2020 improves on this, the core bike handling is great, but the rider weight takes a step back.

To explain – the left stick controls the bike, the right stick the rider. The issue here however is that the weight (no pun intended) of the right stick is a lot less than in previous games. Typically to turn tight, you’d push the left stick and lean your rider into the turns. In 2020, this barely does anything. I went into the Playground mode (more on this later) to practice and it does add a tiny bit but hardly worth using in a race.

Instead, most of the control is through the throttle and brakes, and variable use. The PS5’s triggers help with this, as resistance on them feels like squeezing the brake and gas levers on a bike. It’s very cool. It is weird though, as you go over (multiple) jumps, you’ll find the resistance completely goes as the wheels spin, which is very cool, if not a recipe for RSI.

There are two classes of bikes to race in, and a few modes. Career has you work through a series of races picking a team and earning credits for placing on the podium. Grand Prix is a series of events together, time trial is there, and standard race (which features the variety of double race weekends, qualifying and race, etc.). Oddly, the career is basically the same as a traditional Grand Prix season. I started my career in MX2 (the lower class), did 17 x 2 races (double race weekends), and won, and a no-frills just return to the lobby to start another season. That’s it. The next class up gives a bit more power, but there’s almost no difference between a career and a standard GP season other than you name your rider. 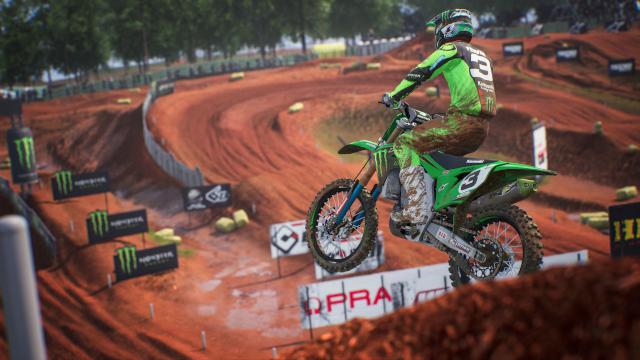 Credits are used to customise your gloves, helmet, and boots by buying one of the preset designs. Your main suit is determined by the team you pick. All the teams seem basically the same in terms of bike stats (is there a difference? I couldn’t find one), so earning credits also seems largely pointless. There’s a trophy for buying a bike – I don’t see what this gets you other than a trophy, and to complete a preset. You can customise bikes, largely limited to moving the number around slightly.

Selecting a class is tucked away at the side of the screen, and I had to watch a few different press videos to work out that there were different bike classes in the game and what difference this made. Time trials don’t have leaderboards. There are a series of puzzling decisions outside of the gameplay such as these that makes you wonder if it was just rushed to release. Time trials with no leaderboards? Crazy.

There is a multiplayer offering but I have not been able to find a single person playing it yet sadly. The track editor is a new edition, but again, puzzling to use. You click around a piece at a time, adding bit by bit across an existing location that has built-in verticality. You cut away at the scenery to make way for the track, sadly you can’t add in your own scenery. Annoyingly, if you want to go back and edit a piece, you need to delete all pieces before it to do so – I found this immensely frustrating. The quality of tracks that people have shared so far is pretty lacklustre, which I put down to the difficulty of using it.

Boy, the racing sure is fun though. A lovely 60 frames per second on next-gen consoles (finally I can enjoy the benefits which I’ve seen PC players have for years) and maybe these little pieces will all get tweaked in future patches. For now, though, I’m having a good time with it, I hope that the MX Supercross game which comes out in a few months has a few extra bells and whistles though to deliver a more complete package.