A caveman? With a jetpack?! Imagine that! Well, maybe you can’t, but you won’t need to any more as Jet Kave Adventure delivers an amusing, well-animated platform adventure, even if it is a bit bonkers.

The plot is simple. You’re kicking about as a caveman, minding your own business and you see an alien ship crash land (whilst moping about after being kicked out of your clan for being a rubbish hunter). You approach, find a jetpack, and off you go. What follows are a vast number of levels of you getting from point A to point B with jetpack-related assistance. Ultimately you’re looking for the spaceship owner. Also, your character is called Kave. Best not to think too hard about it.

The 3D character models move quickly and smoothly across the 2D plane, with all the jumping and hitting stuff that you’d expect. Various caveman-era animals and bugs are kicking about for you to squash, but what I enjoyed most was the jetpack element.

Obviously, jumps can be sustained and boosted by the jetpack. You also have a dash-move with depletes the recharging fuel tank instantly, which has to be used strategically at certain points. Some of the more challenging elements require boosting to mid-air refuels, only to boost again and again to navigate challenges. Certain obstacles, too, require a boost past them to initiate (such as a turntable) and others require a boost whilst holding onto an object to move it. 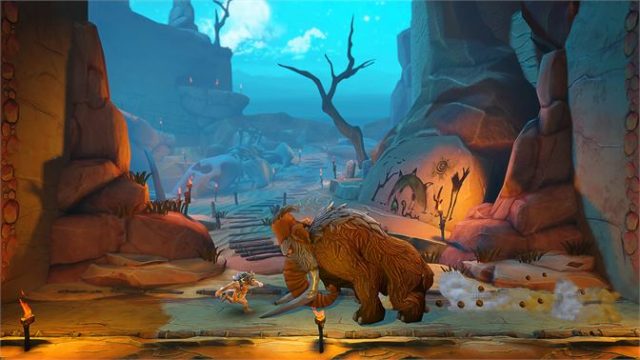 These mechanics play into lovely developing methods that add variety to the levels. Vertically is added in, poles to spin around, woolly mammoth chase segments – lots of tropes you’d expect in a caveman-type game, but all explored and experimented within the context of the one who finds a jetpack.

There are a lot of collectibles kicking about, and a health recovery system by way of collecting fruit to replenish your hearts. It adds an easing to the traditional platforming difficulty, and the collectibles serve also as a currency to further upgrade your caveman at the cave-shop between levels.

The whole presentation really made the game for me though. The fluidity of movement, the crispness and colorfulness of the graphics, and the music. Oh, the music – it sounds fantastic. My partner actually enjoyed sitting with me while I played it as the tune was catchy without being irritating.

With a large number of levels comes the challenge of repetition though, and for the most part, Jet Have Adventure keeps it interesting. Enemy variety doesn’t manage to keep up with the mechanics though, and the majority are defeated the exact same way, be it with your club or by throwing rocks. In some ways, they just become a bit of a nuisance whilst you’re enjoying the platforming.

Still, as retro platformers go, Jet Kave Adventure is both a good one and a rare one these days (at least, one that isn’t pixel art). I enjoyed it, and for these types of games, I think that’s the best accolade you can give.