The 4th entry in the series marks for the first Monster Energy Supercross games to appear on next-gen consoles. With it comes the potential for some serious horsepower upgrades.

Unlike MXGP 2020 however (by the same developers), Supercross 4 feels a bit more fleshed out with features and more fitting of a full title release.

Let’s start with the obvious: yes, the frame rate is great and a lovely 60 FPS on PS5. It looks good and sounds great too. Adaptive triggers are well used illustrating the traction and particularly noticeable when you go over jumps and hit the gas in the air. The technology behind these triggers boggles my mind (even if my personal preference is not to have them enabled).

In my recent review of MX GP 2020, I thought it felt like a bit of a limited next-gen release. I was worried that Supercross 4 would go the same way – and whilst it had a few issues, it has one thing which is very, very cool. A character RPG element!

Seriously. So the better you do, the more prestige points you get, and thus, the upgrades you can buy. These are things like turning in corners at speed, braking maneuverability, and it’s great to see this in a career mode which adds an excellent progression. The downside is that it makes a hard game, much, much harder for a long time at the start.

This difficulty is all to do with the flow and rhythm. Getting the right momentum on the jumps is hugely important – get it wrong and everything is slow and horrible. You hit every jump wrong, it goes onto the next, and the next, and it’s so hard to get right. From someone who plays a lot of these games, I really, really struggled in career mode for many races to the point where I really didn’t want to play it. 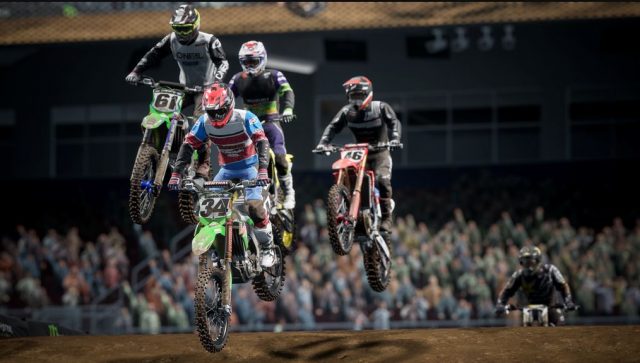 There is a tutorial race but it basically tells you nothing. You learn starts, braking, and scrubbing (getting your bike level over a jump to ‘scrub’ off the height and land quicker thus going faster). The first training session in your career asks you to whip four times. What the hell is a whip??

If you know you know, if you don’t, you Google. The tutorial tells you that the right stick moves your rider’s weight, but it doesn’t tell you what this means (and like MX GP 2020 it seems to do very little in turns). Important then for jumps, but with low effectiveness at the start of your career, coming dead last in ‘very easy’ mode is depressing.

The compound mode is back for a variety of challenges and other bits, which is a fairly cool addition although I feel like the open-world nature of it is a bit pointless. One thing it confirms to me though is that the game is a lot more fun with the 450 bikes as opposed to the 250 ones.

Supercross games are pretty much limited these days to this series, so there aren’t masses of choice if you want to get your biking on. It is a good thing then that Supercross 4 isn’t terrible, but it is sort of struggling evermore with this balance of what it wants to be: is it a simulation or an arcade experience? The presentation needs some work and they have the license, loads of customisation but it’s overridden with career sponsors at points. It doesn’t ever feel cohesive, more a mish-mash of ideas over the series all bundled together.