Monster trucks! Like buses, none for ages, and then along comes Monster Truck Championship last year and now Steel Titans 2. It takes a leaf out of Championship’s book (which so good) but it should have taken a lot more, as Steel Titans 2 is really boring.

How can a monster truck game be boring? It sounds impossible. It begins with a tutorial: drive forward. Complete! Drive backward. Complete! You’re then in an open world, with triangles to collect. What, why! Who knows. It’s not explained. Into career mode then, and you have two options between World Career (open world point to point races) and Arena, the more traditional monster truck action.

Arena mode replicates the monster jam events, sprint races, demolition/ trick events, and World Career is exactly the same…. with some open-world point-to-point races added in. It’s oddly held together with a weird linear progression, which unlocks various tricks as you play (real-world favourites are here though, yay!). It has no spark at all.

Back to the open-world now, and exploration is encouraged to painstakingly unlock more trucks. Certain trucks can only open certain secrets though, annoying when you find one and have to go back to a garage, change car, then head back out. 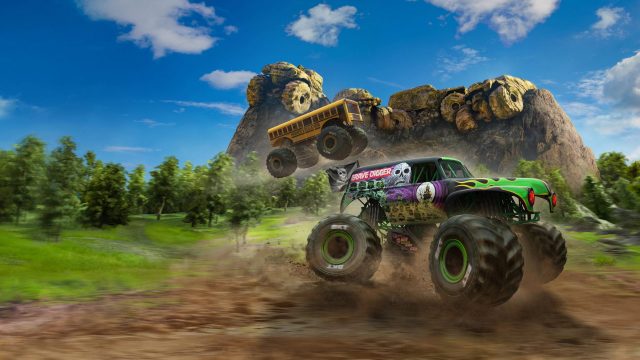 In Monster Truck Championship, the trick events and arena sprint races were my favourite part. Caravans, cars, loads to smash into. What does Steel Titans 2 have? Some boxes. Backflips against walls? You can, but there’s no ramp by the walls you have to backflip against. So you smash them, then accelerate up as your truck chassis is wrecked. Triangles exist in this mode too. Not sure why.

The sprint races, the first one you do and it’s a big circle with an augmented reality barrier around it. Why? They all do as well. I don’t like this at all. It’s really clear in an arena which way I should be going, why have these massive artificial sidewalls?

Tricks can be done but the handling is immensely light and it makes the trucks feel annoyingly floaty – this is worse in the open-world sections where the tiniest rock can send you spiralling out of control. Special mention goes to the music which is next-level bad. The frame rate maintains a steady 30, but it looks very dated compare to last year’s Monster Truck Championship, which is an all-out better monster truck game.