I’ve never been one to go for the Souls games. The level of difficulty, frustration and repeated losses to enormous bosses just never sounded like my idea of fun, but having watched a couple of Twitch streamers play them lately I started to wonder if I could, after all, cope with this style of game. So then up popped Gods Will Fall, a game with super-tough bosses designed to challenge, push your skills to the limit and, in my case, confirm that there’s a reason why you avoid Souls games.

Let me make one thing very clear to start with – I still like the idea of Gods Will Fall. It’s a slightly less serious version of the aforementioned frustrate-em-ups, with a more top-down view and a band of willing fighters who all hang around outside a cave entrance while one of them steps in to go and hunt down the God nestled within. Along the way smaller enemies will do their best to get in the way and chip your health down, so it’s up to you to avoid them or kill them. And you might be wondering what the point of killing them is, if you can just avoid them. Well, that’s god an easy answer – as soon as you enter the level the boss’s health is displayed in the top right corner. The boss is still some distance away, but killing the minions (no, not those minions) will reduce the boss’s overall health, so it’s quite possible to reach the boss with a good third of its health already depleted. The bad guys you’ll face along the way are fairly random as well, meaning that each time you head into the level you don’t quite know what you’ll be up against, something quite frustrating when the person you picked is woefully underprepared for the kinds of bad guys you’re up against. 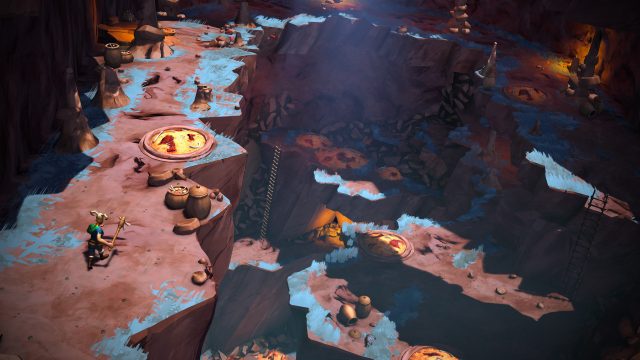 If you fail, either by being killed by a minion, being annihilated by the rock hard boss, or falling off a ledge to your death because the camera made it look like a tiny drop instead of the 50 metre chasm it really was, then you’re stuck in the level until someone comes and defeats the boss. As soon as that’s happened, all of the trapped characters get released, and you’re up to a full quota again. This is, essentially, giving you a set of lives, a limited number of runs through the level before you’re out of luck. Only this way, each “life” has different characteristics, different weapons, different health and so on. It gives some interesting options between sending in a weak character to scout ahead, thus saving your stronger ones for later, or diving straight in with your number 1 pick in the hope of clearing the level and killing the God sooner.

But the God bosses… my word. Some of them are so, so tough. I thought I was ready for a game like this, able to press on with numerous retries and learn how the bosses behave and attack, but the frustration of the difficulty just became overwhelming. I’m absolutely certain that if you don’t mind being patient, and are happy to fail repeatedly and do the same level over and over, you’ll be fine with this. I think if starting a boss battle produced some kind of checkpoint it’d be easier to handle, but if you’re dead then you’re dead, and a whole new adventurer needs to head in, get through the minions, navigate to the boss, get killed, then repeat a few more times. It’s exactly what put me off the likes of Dark Souls all along.

But, that said, there are people who love Souls games, and other nightmare-boss-heavy games like Hollow Knight, and as such there will be people who really enjoy this. But for me the randomness of the enemies along the way coupled with the intense frustration of the bosses and occasionally awkward camera angles really put a dent in my enjoyment. There’s a good game here, and if you’re into that kind of thing then I’ve no doubt you’ll enjoy it, but I don’t think this will convert others in my position over to this genre.