Would you like to turn on gore and dismemberments? Yes please! What a way to start a game.

Samurai Showdown was actually released nearly two years ago across multiple formats, but very recently updated for Xbox Series X (available at no cost for existing owners) for enhanced frame rates (up to 120fps if you have the kit).

Taking place a year before the events of the first game, where Japan is about to be enveloped by a terrible evil. A trapped spirit is threatening to destroy Japan, and a number of warriors come together to push these forces out.

Ok, but get to the combat! That’s why we are here right? Samurai Showdown looks a bit similar to the newer Street Fighter games with the bulging 3D models battling across a 2D plane, cell-shaded with hyper-realistic figures. But what sets it apart is the difference in how it plays. Let me elaborate.

Super long combos and over-the-top moves are replaced by a more basic approach. This isn’t a bad thing at all, as instead you are left to focus on the position of your fighter, how and what your opponent is doing, and looking for openings. There are deeper mechanics here with regards to some elements (rage bars, super special moves) but these are limited in their use.

Attacks are light, medium, heavy, and kick (low damage but fast). Pulling back blocks, and tapping it gives you chance to parry – which results in a surprisingly tactical fight that is welcoming for beginners (certainly more than I was expecting given the presentation of it). You can disarm your opponent which adds a cool element too, and can recover your weapon (again, relating back to the importance of positioning). 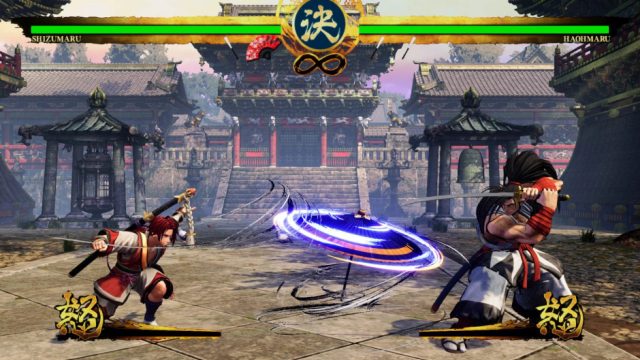 Super special moves and rage attacks do trigger short cutscene mega attacks which look fantastic. I felt a bit overwhelmed initially as some of the super special moves require some dexterity to pull off, but with it only being a handful, it’s not too bad.

There are a number of characters on the roster with more coming through the next iteration of the season pass. They all look great and are pretty varied. The first character I picked has a wolf that runs around him on screen. There’s also a ‘referee’ in the background who raises flags to each side depending on whose strike lands, which adds a great authentic Japanese feel to it.

This is felt throughout all of the presentation which is bright, bold and colourful, and voiced with authentic Japanese accents (although on the menu it’s very hard not to try and impersonate the voiceover as it reads out the various sections in the Options screen).

One of the complaints I read about the original release is how laborious the load times are. I can’t test this, but I can tell you that they are very, very fast on Series X. Similarly, the gameplay is constantly very smooth, and whilst I can’t test it at 120fps, a smooth 60 is in my opinion the bare minimum for a fighting game and this delivers it easily.

The story mode is a bit by the numbers in terms of classic 2D figure style, but the action is what’s really important here and Samurai Showdown does a good job of delivering that whilst adding something a bit different to the genre.