I can still remember my excitement at finding out that Mass Effect 2 was getting a PS3 release. I’d heard Xbox owners rave about Mass Effect, its open universe and conversation choices that impacted how the game panned out, but never had the means to be able to actually try things out. But then Mass Effect 2 turned up, and it absolutely blew my mind. The mix of enjoyable combat, awesome abilities and the frankly ridiculously relaxing mining sub game with that wonderful ambient background music all added up to one of the best PS3 games I played. And then Mass Effect 3 arrived, which was also brilliant, and gave me another huge game to enjoy in a similar light. They were games and experiences I’ve discussed many times since, and often contemplated digging out the PS3 just to try them again.

But now, no need. Mass Effect Legendary Edition brings the first three games to the PS4 and Xbox One (there’s no Andromeda here) along with some generation-based visual upgrades and gameplay tweaks that’ll make your experience across the galaxy even more satisfying and enjoyable. It might not have the same magic as the first time you played them, but they’re still incredible games that deserve to be played, and as long as you’ve got a couple of hundred hours to plough into them there’s still a lot of very high quality gaming to be had here.

In addition to all three games you also get every last drop of DLC that appeared for them over time, giving you a hefty collection of additional missions, equipment and outfits that you might not have seen or tried out if you played these at the time. There’s also the options to jump straight into Mass Effect 2 or 3 without completing the earlier games first, which will kick off the comic book style intro to help you make decisions that would have ordinarily been made during the earlier games. It’s a really handy feature, and while I’d fully recommend starting at the beginning of the first game and working through from beginning to end, if you want to hope in and see the slightly prettier visuals of the latter pair of games the option is there for you. 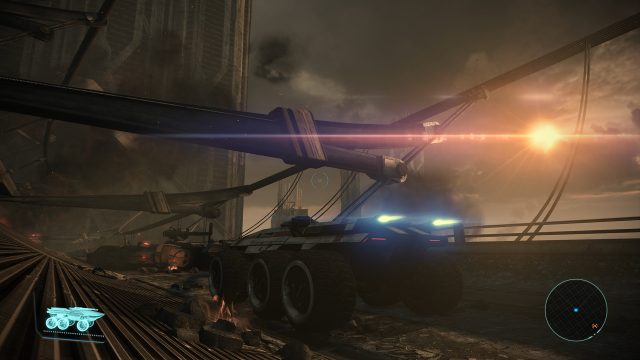 The other thing you’ll enjoy if starting from the beginning is seeing how things improved over time. Controls and combat has been improved, especially in the first game apparently (as I mentioned though, I never played it first time round to compare), and everything has been tightened up throughout. But visually you’ll still get the progression over time, and firing up Mass Effect 2 for the first time after finishing off the first game is a very impressive moment, giving you some gorgeous vistas that you won’t see in many other games, even those made more recently. And then, just as you think you’ve seen the best this collection has to offer, Mass Effect 3 turns up the heat even more and will absolutely amaze you with how good it looks at times. They’ve really done a great job of sprucing up the visuals for a more modern audience.

But what surprised me is how well the conversational decisions have held up. There’s been plenty of games since these that have used a similar method of changing your character’s stats and personality through your conversation responses, but none have really had the same effect that Mass Effect has. Being able to have people see you as a nice player or absolute bastard is great, and while I always generally play through being nice, it’s good fun being a hard nosed, selfish moron for a little while as well and seeing how differently people approach you and work with you. Similarly the characters you meet and work with are fantastic and memorable, again continuing to lead the way as more modern games try and fail to provide an experience that lives longer in the memory. It’s an impressive monument to one of Bioware’s finest works that things are still so playable and exciting nearly 15 years after it was originally unleashed on the world.

Essentially there are very few reasons why you wouldn’t want to pick this up. It’s a huge timesink, so if you don’t want a game that’ll eat 100-odd hours from your gaming time in the coming weeks then you won’t get the most out of this, and if you’ve already played it and struggled to enjoy the style then the new version won’t do anything to chnage your mind. But if you enjoyed it first time round, or have never experienced the world of Mass Effect, then this should be top of your shopping list. It’s insanely good value, incredibly good to play and will blow your socks off with how good it looks for a PS4 and Xbox One game.

Reviewed for PS4 (Played on PS5)