This year was always going to be a challenge for Codemasters. The world of F1 stumbled under the pressure of Covid, and while the powers that be miraculously still managed to fit in a full season last year the planned changes to the cars, the most dramatic in a long, long time, just didn’t happen. Instead the major rule changes and new cars were pushed back 12 months, and what could have been a game that naturally looked and felt new and exciting had to be put on the shelf. In amongst all this, Codemasters were busy selling themselves to EA, with the impending organisational upheaval surely putting a strain on day to day operations. It’s pretty amazing, therefore, that Codemasters have managed to absolutely nail yet another F1 game, with just enough by way of new features to make it worth a look if you’re a racing fan.

The big new feature this year, and the one pushed on you the most in the menus, is the Braking Point story mode. And before you think “oh great, not another rubbish attempt at a campaign…” just stay with this for a moment. Braking point does a genuinely great job of mixing cut scenes, acted plot between races and on-track racing action to give you a good few hours of entertainment that’s far more interesting and fun than most will give it credit for before playing. The racing itself takes the form of various setups, whether that’s trying to catch another car within a certain number of laps, racing with failing components or just running through a 25% length race and finishing as well as possible, and it’s varied enough to never quite know what’s coming next. The story itself is good too, and while it’s a bit cheesy and predictable at times the actual animation and voice work is very decent indeed, even being treated to a brief cameo from Lando Norris at one point. There’s some pretty neat touches that you need to look for though, especially in the Twitter-syle news feed on your phone, which updates differently depending on what happened in the last race, whether you got a podium, completed your objectives or whatever else. As a game mode Braking Point is a worthwhile addition and shows the start of what might be possible under EA’s guidance. There’s a very strong hint of the FIFA and Madden story modes here, and this has the potential to be padded out into something really special.

And yet it’s not Braking Point that really caught my eye – instead, tucked away in the career options, is what I reckon is the best new mode this year: the two player co-op career. Starting off in the same team you and a friend work your way though the ranks while sharing your career, racing together and ultimately trying to get your choice of team up to the top of the standings. You can set up the game one of two ways, one where you follow each other around (so if one of you gets a McLaren contract the other player gets the other seat) and the other that lets you diversify your career progression by joining different teams later if you want to. It’s such a great new dynamic, and if you’re talking to each other through the race you can really use strategy calls in your favour, discussing the quickest route through the pit stops, or by going with split strategies to maximise your possible points haul. It’s a brilliant addition, and one that I really hope sticks around for future versions. It’s worth finding a friend to play it with, because you wouldn’t really want to miss out on this one. 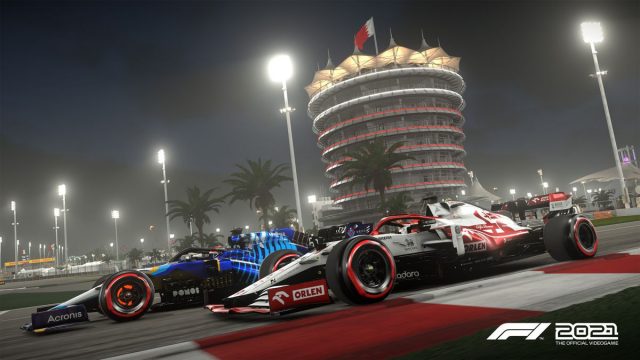 Elsewhere you’ve got the updated visuals for the new consoles. bringing the game to life with some incredibly realistic looking graphical effects, and while replays can still look a little rough round the edges they’re at least longer now and do a better job of saving the interesting parts of your races. In the race though the sense of speed is incredible, and the visuals pop with the kind of clarity we’re just not used to with the previous generation of consoles. The sound is as good as ever, and while I’m getting a little bit bored of Jeff’s lines that he’s been recycling for the past few years the cars themselves, track announcements and other pitlane chatter is fantastic.

Handling has also been refined following feedback from real racers, something that the Covid lockdown helped with massively. By using F1 2020 as the online race game of choice amongst professionals, the feedback and criticisms game thick and fast, and as such Codemasters have managed to tweak the handling and performance of the cars to more closely match their real life counterparts. Other tweaks come in the various career modes (including the returning, and still excellent, My Team mode) whereby the upgrade system has been simplified, giving you a clearer idea of what upgrades are available and what each one will do. Then there’s the various online modes that we’ve still got, where this year’s focus on easily finding a game means the unranked Social Play options will let you find something suited to the mood you’re in and jump into a game with very little fuss. The Podium Pass is back from last year too (who said you needed EA for microtransactions?) and while it’s entirely possible to just ignore it, you do get some neat things unlocked even without buying the pass for the extras. If you’re going to play online a lot, you’ll pick up the points whether you like it or not.

So with the world of F1 being in limbo this year, I’m very impressed with what Codemasters have done. There are two excellent new additions in Braking Point and the co-op career, the racing has been improved and tightened up, and on the PS5 at least the adaptive triggers work wonderfully, letting you feel the limits of traction as you accelerate out of, or brake into, the numerous corners around each track. I often turn the trigger resistance off in games once I’ve felt what it does, but it’s just too useful on F1 – as such, they stay on. But whatever system you get this on you’re getting a great game that, while looking quite samey in places, has enough to warrant taking a look at this year’s version.