Before you look at this and think “yeah, no I’m not wearing a pink cat-eared headset…” you need to keep two things in mind. Firstly, you don’t need to wear the ears. But also you can get this headset in black as well, so in terms of sound quality and suchlike this review will still hold firm, so stick with us. 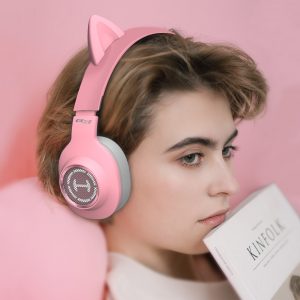 But let’s get the obvious out of the way first – as you can see in the images, this is a very pink headset. You can stick on the cat ears for extra cuteness if that’s your thing, and there’s even RGB lighting on the side of each ear cup to give you a bit more shine if you want to. You can’t see them yourself so it’s a bit pointless if you’re sat alone (such is the case with all RGB headsets) but really, if you’re wearing a pink headset with some at ears the chances are you’re on camera streaming yourself to the world of gaming. In that respect, this is a lovely looking bit of kit, and will certainly give your viewers a conversation point and give you a bit of individual fair on your channel. The lighting can be controlled using a switch on the headset cable though, so if you’re on your own and don’t want the lights reflecting in the screen you can easily and quickly turn them off without any effort.

So anyway, that’s the pinkness dealt with, what about the actual sound? Well, for a relatively low priced headset the sound is really good. You’re getting your best sound through a PC where the drivers can give you the 7.1 surround sound functionality, but you can hook it into your PS4 or PS5 as well through the USB cable if you’re happy with the regular stereo sound. Xbox owners look away now though, there’s no easy way you’ll be using this one. The audio coming through doesn’t suffer from any muffled content, with crisp bass staying well away from the higher sounds and letting both come through – you’ll hear someone sneaking up behind you as an explosion rumbles away in the distance, and there’s no confusion as to what’s coming from where. The faux-7.1 is well implemented and helped by the large ear cups that allow the sound to position itself appropriately around your ears, and there’s a useful volume wheel on the control unit so you can tweak it as you play without needing to stop. 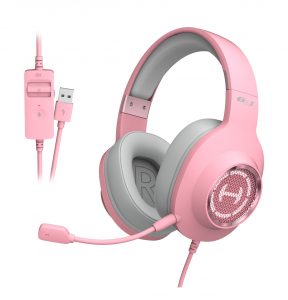 It’s a comfortable headset too, being both light on your head and using some nice soft materials to stop your head from feeling overly tight during long play sessions. The microphone isn’t the greatest you’ll find but is acceptable enough – a common theme on lower-priced headsets – but with their expertise in speakers and audio you’d expect a good sound from an Edifier headset, and this does exactly that. You’ll probably find a difference between this and some top end £500 gear, but if you put the G2ii alongside other headsets around the £50 mark this stands up incredibly well, even against the big hitting headset manufactures such as HyperX and Logitech.

So while the pink might not suit all of you (but at the same time will delight others) the headset itself is really decent, and if you’re a PC gamer you’re going to get a really good experience out of the G2ii. Don’t worry if you haven’t heard the Edifier name before, they’ve been making speakers and suchlike for a good while and are a well-respected brand, and if they carry on making good quality headsets like this then they’ll be a household name in no time. An easy one to recommend.