On the surface the trend of wearing enormous headphones while using your phone is an odd one, moving away from the minimalist tradition of smaller, in-ear devices. But technically it’s not hard to see why. Bigger headsets can hold bigger speakers, and as such the sound tends to be better, deeper and generally all-round more spectacular. Edifier are looking to mix that up a bit though, with their gaming-targeted GM5 wireless earbuds, and if you’re looking for a more subtle way to enjoy your gaming and music on the go, or even want something for your PC gaming that is lighter for your head or to look more subtle when streaming, these are spot on.

Arriving in a charging case that sucks the earbuds into place magnetically and charges them on the go, the GM5s look really nice. The sleek silver colour and carefully designed shape really looks the part, and with touch-sensitive bands on each bud giving you plenty of control over what’s going on they’ve been very well considered in the design stage. Popping them into your ears is a bit of a voyage of discovery though, and it might take some time to find the most comfortable position for them – I certainly had a couple of uncomfortable sessions before finding the best position for my ears, but the position was definitely there for the taking. Once that was sorted, I was able to wear them for very lengthy amounts of time without any discomfort. 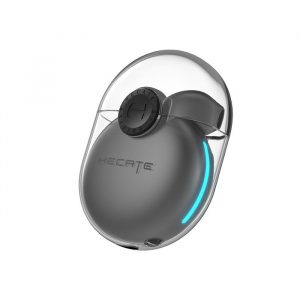 But all this would be pointless if the sound quality wasn’t up to much, but the great news here is that the GM5s sound fantastic. There’s a really good spread of sound across bass, middle and treble and the sound is crisp and easy to listen to. The built-in microphone isn’t going to win any awards, but considering how far away it is from your mouth it uses fancy noise cancelling tech to focus in on your voice and certainly make phone calls manageable in anything less than gale-force winds. I took a call with them while I was walking along a beach, and the person on the other end was more than happy with how clear I was; there certainly wasn’t any need to repeat things I’d said despite families and waves nearby making noise. Gaming and music both sounded great, but for even better gaming quality a triple-tap on the side of one one of the earbuds fires up Gaming Mode – bringing the latency right down to virtually nothing while still maintaining the excellent sound quality you’d been enjoying previously. They work brilliantly through a PC too, so whether you’re trying to squeeze in some lunchtime Rocket League or watch a video without disturbing everyone, that’ll have you covered. 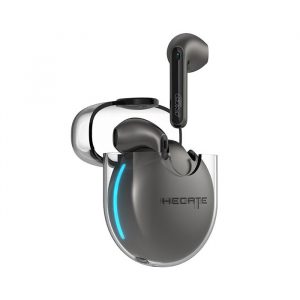 In fact the only main thing that let me down was trying to hook them up to a PS5. Because of Sony’s bizarre rule about not sycning third party bluetooth devices the best thing I could do was to pair them with my TV, but for some reason that left me with a delay of half a second or so, which is really off-putting. I had the same issue with some bluetooth HyperX headphones as well so this isn’t a problem with the GM5s as such, but don’t buy these in the hope you can hook them up to your shiny new PS5 because, sadly, that won’t happen. My other gripe, which seemed like an odd omission, was not being able to change the volume from the earbuds themselves. Considering you can skip tracks, answer phone calls and enable various modes I’d have thought there’s be scope to add volume controls too, but there’s so many commands there already maybe they just ran out of room for more.

But that’s a couple of small blips on an otherwise surprisingly brilliant package. Battery life gives you a solid 7 or 8 hours and can be fully recharged 4 or 5 times from the case without needing to top that up with the included USB-C cable, and unlikeother earbud manufacturers that might insist on a more stark white colour, you’re not going to be immediately noticed wearing them either. For PC and mobile use there’s a lot of reasons to look out for these, and whether you’re on the bus, in front of a camera streaming to Twitch or sat in bed playing PUBG without waking up your significant other these will definitely help you out and give you a lot of fun in the process.