A little while back we reviewed the Beyond NRG gaming energy drink, and found it to be really rather good. If you didn’t see that review or want to remind yourself of what we thought, feel free to head over there first and see what we said. Now, some time later, we’ve got some updated thoughts as well as a couple of brand new flavours to tell you about.

Firstly, I mentioned in the review that the drinks were quite sweet, and I wasn’t sure if that was personal taste or if the makers had gone overboard with the sweeteners. What I’ll gladly say now is that after a few more of the various flavours the sweetness didn’t seem quite so overpowering. Whether that was me being new to the drinks, or if I’ve just got more accustomed to the flavours I don’t know, but I happily make up one of these when I know I’m going to be up for a while longer and need the extra energy, or even if I’m doing exercise and want something that is going to hydrate me and keep me active at the same time. 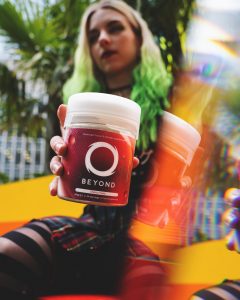 But then, just as I thought I was sorted, I get sent the two new flavours of Beyond NRG: Cherry Twist, and Lemon Sherbet. It’s worth noting that I really like cherry and lemon flavoured drinks generally, so I was in two minds about these – will they add a new dimension to what I’d already started to enjoy, or would they fall short of the flavours I’ve enjoyed before? Well, that’s an easy one – these taste great.

The star of the two new flavours is the Cherry Twist, without a shadow of a doubt. The flavour is clear but not too strong, and it’s not difficult to knock back an entire shaker’s worth of drink over 15 minutes or so. This tastes more like a nice squash-based drink than an energy drink, and while there have been charry flavoured drinks I’ve had in the past that carried a plastic taste and somehow made me even more thirsty, this really nails it. It smells good, tastes really nice and would definitely be my go-to flavour if I wanted an NRG drink without taking ages to pick my flavour.

The Lemon Sherbet was nice too, but after the initial smell of the powder (which seemed overly sherbetty) the actual sherbet taste was pretty much nowhere to be found. The lemon taste is nice enough though, and not as sharp as you might imagine, but they could’ve easily just called this “Lemon” and had a more accurate taste name. Less interesting maybe, but I’m sure the marketing folks could have come up with something with a bit more zing that would more accurately represent the final flavour. It’s nice though, and it’s certainly not a flavour that’ll sit in the box and never get used, but if I had to pick between the lemon and cherry flavours, the cherry would walk it every time.

So there it is, two brand new flavours to try out and keep you going while the madness of a Rocket League session is zipping along around you, and two more flavours that won’t leave you questioning your drink choices. I’m looking forward to seeing what else these guys can come up with!