Originally starting as a card battler called Shards, what is now Cardaclysm (which is a nightmare to type): Shards of the Four has become a single-player, deck-building card game. It’s a bit like Slay the Spire cross Pokemon, but that’s also doing it a bit of a disservice.

You begin in an isometric world as you walk around, and come across monsters. You fight these monsters, earning them for your own deck to build and customise for future fights (you can see the Pokemon link here).

Once in battle, you call out up to three of your monsters to battle up to three of your enemies, in a turn-based affair. Each card (or monster) has an attack and a healthy amount – run out, and they die. Creatures will each have various attacks and stats, whereby a layer of tactics comes into play.

If your character takes a hit, it’s game over, so it’s important to keep the monsters out there fighting for you. A currency allowing you to cast only a certain amount is important, as each battle requires a careful approach in order to deal the most damage, but also to ensure that you can protect yourself with more monsters if required. In most cases, however, I found that an all-out assault right away was the best approach.

This initial hit being so important means the mulligan that’s often offered in card-battling games is very important. You want the strongest cards you can muster right upfront. It will be no good a powerful card popping up later only for you to not be able to afford it. 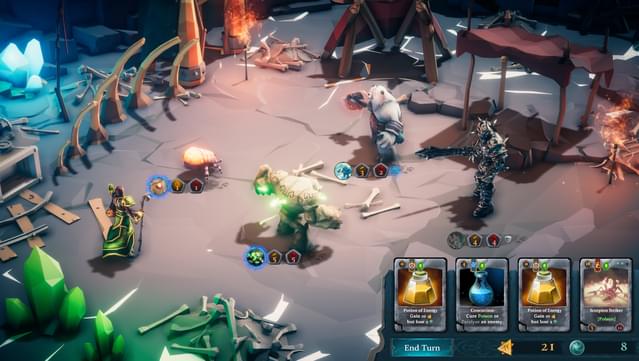 Card effects are typical care fare these days, which is a bit of a shame. I play a lot of card games, so your mileage may vary, but there are effects which do double-attacks, do effects on death, do effects when cast etc. The same effects are in Hearthstone, Legends of Runeterra, and Magic – so if you’ve played them, you’ll be very familiar. It’s so disappointing them that the impact of Cardaclysm isn’t such a tactical thinking person’s game rather than a ‘hope your powerful cards come up at the start’ type thing.

Levels add the variety as well – both visually but also in terms of mutators which offer different ways to play. These basically overlay certain effects over the game, such as every card taking damage on every turn – although a lot of these are also card effects in other games.

Powerful cards can be made, however. By collecting duplicates, you can ‘level up’ your existing cards. This however makes them more expensive too, so you may want to keep an army of Werewolves rather than one super wolf. Whilst the effects of the cards aren’t particularly new, the artwork is pretty cool and it’s nice to see the enemies revealed in full 3D after seeing their artwork, although the graphical style does neutralise the impact a little bit.

At the end of each level, once the last enemy falls, a super enemy appears (called a ‘Cursed Being’). The Cursed Being will chase you around the level in real-time, like a demonic Pac-Man. Your choices are to either escape the level or stand and fight, and certainly, early on, it’s borderline impossible to beat him. Fail, and you’re doing the entire level over again. It’s a very interesting mechanic, but the penalty for failure is really painful, especially as the levels are procedurally generated so learning routes is also not an easy thing to do.

Given it’s a single-player deck-building RPG, it’s surprising that Cardaclysm doesn’t really do much other than plopping you into levels to kill everything. Even ‘Gotta Catch ‘Em All’ had a point. A few bugs also sour the experience a bit (I had to do a few restarts to fix a frozen HUD) but I still managed to find some enjoyment – it’s just the same enjoyment I get in similar games. And whilst Cardaclysm is very sound, it’s probably not quite enough to set it apart from its counterparts.

Sound like your kind of thing? Check it out on the Xbox store…