The big difficulty I can imagine in developing sports games is how to make them last once the initial burst of excitement wears off. EA have, in recent years, tried leaning on story based modes and various versions of Ultimate Team to try and keep the interest levels up, but Madden has had a lack of love for its longer term career Franchise mode for quite some time. But with this year getting a sizeable reworking of the Franchise mode is it finally a better time to sign up and take your team to the top?

Well, if that’s what you’re after, then yes. Definitely. Playing out like an RPG of sorts, the new Franchise mode lets you take control of your team and the various coaches in order to best build a structure that suits your style of play. It might be that you want to spend more time with passing plays, so you work more on receiving and building up your receivers. Perhaps you want to make the most of this year’s improved running game and bulk up your offensive line to ensure those gaps open up nicely, or simply scout ahead to the next match and tweak your training and focus accordingly. There’s a huge amount of choice between games, and while intense training might wear your players out to an unexpected degree (more on that later) it’s a great way to manage your team and drive it in the direction you want to go. The very fact that each team has its own strengths and weaknesses means you’ll potentially go into each game looking to carry out different plays to the last game. You might have had great success running previously, but with a beast of a defensive line coming up you’re going to be getting rid of the ball quickly, focusing instead on shorter passing plays and snappy receiver routes. It mixes things up nicely, and makes you try out things you wouldn’t normally try. I’ve really enjoyed the running game this year, for example, and while I always found the big gains from a satisfying long pass to be really exciting, the moment you break through with your running back and make a 30 yard run is something to behold.

Such plays, as well as other big events like touchdowns, turnovers or sacks, play into the new M-Factors dynamic, tracking the momentum of each team throughout the match and providing boosts or limitations depending on which side of the momentum you’re on. Yo might get improved blocking, or better catching in coverage. It might be that the opposition can’t see their routes before a play, something I suffered with after a rough patch in a game whereby all routes before the snap were jumbled up wiggly lines. It makes things far tougher, puts you on the back foot (or front foot if you’re the one doing well) and gives a very clear indication of just who’s on top of that phase of the game. It gets the crowd moving too, and as your momentum shifts so does the reactions from the crowd. Crank the volume up and you’ll really get a feel for how the thousands in the stadium are reacting to what’s going on. 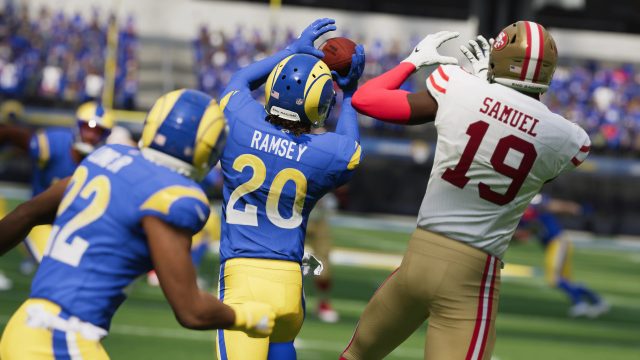 But in amongst all this is the players’ stamina, and it’s something that could do with some tweaking. The idea is to stop you finding a play that works, or a single player who runs the show, and just hammering the same thing over and over. But I found some weird issues, such as my running back (who I’d used a bit, but not excessively) suddenly being knackered and running about as quickly as a wounded snail. It seemed like a very sudden drop in performance from a supposedly pro athlete, and it’d be nice to be able to get a little more specific feedback in terms of who’s suffering and by how much. It’s the kind of thing I’m sure can be balanced in an update so hopefully that’ll get sorted; I’m all for trying new ideas though, so hopefully they can get that right before too long.

Elsewhere you’ve got the usual array of game modes, with the Face of the Franchise getting a new story as well. It’s really decent, taking you from college through to the NFL as you’d expect, and there’s plenty of conversation choices and activity selections to guide things in a various direction, be that training with the team to improve teamwork or working on your brand to please sponsors and suchlike. There’s some real weirdness with some of the dialogue though, with talking randomly stopping, subtitles being miles out of sync with the voices and other areas just having no voiced dialogue at all. The game mode itself is good fun, and I took advantage of the option to be a running back with this year’s game bringing out the options for better blocking and suchlike, but it needs to be tidied up quite a bit.

Which brings us to the annual question of whether it’s worth picking up if you’re already enjoying last year’s game. Well, that depends on several things. If you’ve been desperate for a decent Franchise mode, then this is a no-brainer. It’s a long, engrossing mode with a lot of control and some really cool new elements to it. Similarly if you’re a big NFL fan and want the latest rosters, improved on-field blocking and new momentum mechanics then this should be top of your shopping list. But everyone else… that’s a harder sell. It’s still a great game, it looks and sounds tremendous, there’s a lot of gameplay to be had and there’s more customisable options through the various ways of playing. But is it different enough for people who like to just sit down, play a couple of games and then turn it off? Possibly not. But really, that’s what updates are about. We’re never going to get a brand new game every year, because the sport doesn’t change that much. And with that in mind I’d say Madden NFL 22 is a success with its vastly improved Franchise mode and better on-field mechanics, and if we can get a few wrinkles ironed out this could be even better.