Guilty Gear Strive, the latest entry in the 20-odd year fighting game series, was launched a couple of months ago, and hot on the tail of a major balance patch and the introduction of the 2nd DLC character, now seems like a fair time to assess and review just how well it stacks up against its rivals and its own history.

First up, GGS is a very very good looking fighting game. Its hard to think of any games of this type that look this good and are animated this well. Backgrounds are varied but consistently gorgeous, and the characters themselves wonderfully designed and move with stunning attention to detail. As you’d expect from GG games, the roster is hugely varied with some mainstays like Sol and Ky looking great but as you’d expect, others such as Faust and the newly released Jack-O having cool redesigns and new characters like the hugely popular Giovanna fitting in seamlessly. From their match opening animations, to their in game movements, every character looks like it has had huge amounts of time invested in them, and ensures that GGS always looks fantastic regardless of what players are doing with their characters. The soundtrack is the usual blend of grandiose scores and often dodgy metal tracks (Smell of the Game!?!), which probably won’t have you dashing out to hear it on vinyl, but perfectly fits the games its part of and is pretty much vital to the feel and atmosphere of a GG game anyway.

Since the game’s initial launch, there has been some criticism of the game being dumbed down or simplified in comparison to earlier instalments in the series. Technically this is true, as GGS does feel considerably less intimidating when put next to older titles. But this really doesn’t feel like a bad thing. Previous GG games are a hardcore players’ dream with complex mechanics and character styles that require dedication and substantial time input to master or even know how to use. But realistically, this is also going to put off players who just don’t have the opportunity to dedicate all their free time to mastering a game to that degree. GGS feels like a decent balance between providing serious players with the tools and mechanics to play and do stuff the casual player just can’t do, and letting that more casual player at least feel like they have a grasp on all things their chosen character can do. Better players will still win at this game as it still rewards players for their time and effort, but even those of us with restrictions on our play time can start to develop our use of Roman Cancels and advanced blocking techniques. 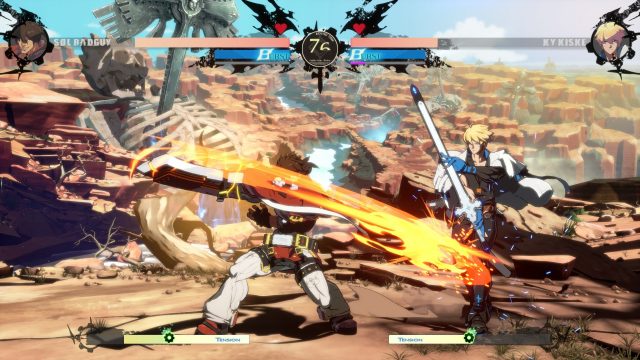 The all-important online mode supports this with its levelling system, which allows you to play in as high a level as possible, but prevents you from playing any lower than your current assigned level. Match-making on the whole is good, and I’ve never felt like I’m being unfairly paired up and punished for it. This does however, bring us onto the online lobbies. As cool looking as they are, with everybody’s customisable 8-bit sprites pottering about a multi-floor hotel and matching up with other players, the reality of them is quite the opposite. Sometimes things are fine, you find a player, run over and match up quickly. But often, and still even 2+ months in, you can find yourself chasing about empty foyers, failing to match with players, getting stuck in place after a connection fails and generally coming to resent what initially felt like a interesting way of presenting the online. Once you’re into matches though, GGS plays like a dream. I hardly ever notice or consider the rollback connection, which tends to mean its going well, and since launch I can count on one hand the number of matches I’ve not rematched because of the connection. Hopefully, this level of netcode will become the industry standard from here on in, and GGS is now the benchmark for future fighting games to match.

Other game modes included are relatively standard. Like in the previous Xrd series, the story mode is effectively an admittedly pretty cool animated movie that you have no real interaction with. There is an arcade mode, Vs mode, Training and Mission modes to learn and practice techniques, mechanics and combos, and a survival mode. Hardly revolutionary, but there’s still plenty to do offline in a game where most people will spend the majority of their time online.

Generally, the game is fun, rewarding and looks like being one of the genre’s big hitters for some time to come. Some balance inequality seems to have been ironed out with the latest patch, with buffs to weaker characters being the order of the day rather than nerfs to the stronger ones. The 2 DLC characters bode well for the future with both characters adding new gameplay types rather than providing variations on existing ones. As Street Fighter 5, Dragon Ball Fighterz and possibly Tekken 7 wind down with final characters and updates, Guilty Gear Strive looks set to become the current place to be for fighting game players, and future rivals are going to need to think hard about character variation, art styles, netcode and accessibility if they are going to be a match for it. Here’s to 20 more years.