Lost in Random is the latest title from the EA Originals label – specialising in creating less-mainstream type games from independent studios.

You’d be forgiven for thinking, with its visual style, that Lost in Random is a Tim Burton production. It looks fantastic and seems to be something like a sequel to the Nightmare Before Christmas or Coraline, with its slightly misshapen puppet-like characters, and dark but vibrant colours.

It’s also a fairy-tale, albeit a dark one. The word ‘random’ comes up a lot because some of the mechanics are predicated on randomness, but also the world is called Random. The tale tells of two sisters, named Even and Odd (which was a bit on the nose for my tastes but whatever). You play as Even, who, with her family lives in Onecroft. Each of the areas is named after a number – the premise for this is that, once a child reaches 12, the Queen rolls a die which will determine where they go to live the rest of their lives.

Roll a 6, and you’re giggling – off to Sixtopia which is basically hanging around with the Queen all day chilling out. Roll a 1, and you are in Onecroft – basically sorting through all the crap from the rest of the world. 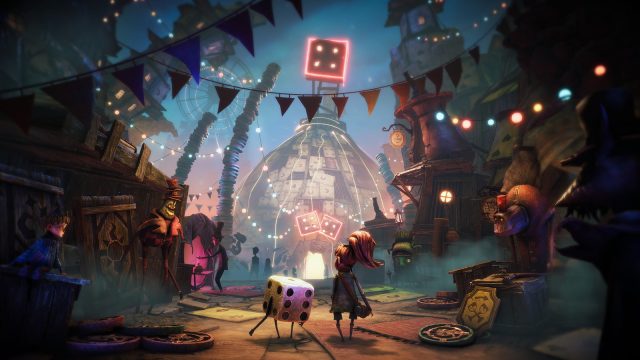 Odd rolls a 6, and off she trots with the Queen. But you as Even start to experience nightmares which suggest to you that perhaps all is not as it seems in Sixtopia, so you set off to save her. You quickly gather a slingshot and a magical die (known as Dicey), and this begins the tutorial for combat in the game.

Combat is half turn-based, half real-time. Each battle begins with your slingshot in toe, like a traditional third-person shooter, with you picking off enemies who drop crystals. These crystals let you add a card to your hand which is pulled from your main deck – and when dicey is rolled, these cards come into play. Cards will give things like healing potions, and weapon buffs. So you’re shooting, rolling dice, deck building, selecting cards – there’s a lot going on, but it never feels too overwhelming. Some of this is, in part, due to the difficulty which always felt a bit easy – the enemies are generally fairly slow, but there is often a lot of re-spawning enemies, so it can go on a bit and feel repetitive as a result.

Still, the game world is just fantastic and this keeps you interested. I absolutely loved the setting and the characters within it. Each domain has its own intricacies – Threeworld (actually called Threedom) is in a forever state of war due to the warring Triplets who run it. There’s a slightly-too-close-to-Stranger-Things’ UpsideDowntown and a Shadowman running about who’s a creepy child catcher, as well as the ‘Nanny’. It’s frightening without being horrific and sets the scene perfectly.

All the characters have some incredible voice acting, which for me puts Lost in Random as more of an atmospheric experience than a gameplay one. The combat isn’t terrible, but it can’t hold a candle to the world that is built, but it is so rich, so well-acted and so interesting that it’s hard not to recommend Lost in Random.