Subdivision Infinity DX is an enhanced version of what was originally a mobile game, which then made its way onto the Switch. What we have here is a flawless performing PS5 version, which does a great job of getting you into some space shooting action, but then runs out of steam a bit.

Subdivision Infinity DX is a 3D space shooter. The game begins within a cockpit, but then quickly moves to a third-person view as the ship launches out into space. Oddly, that’s the last you see of this in-ship view, with the remainder of the game in third-person.

There is some story that is overlaid by pictures of characters and text boxes – it’s serviceable but some headset audio coming through would have been a nicer touch. Your mission is to investigate a space station that has cut off radio communication. Over the course of the game, you learn that humanity is under threat and naturally, only you can save everyone.

You’ll do this by shooting everything, and most missions involve only that. Thankfully, the ship controls are decent. You can aim around the screen but also have control in the three-dimensional space for your ship, so you have full control of where you’re going. This is important for these types of space games, but it can make shooting a bit tricky.

Thankfully, there is a large amount of auto-aim for when you see nearby enemies. Getting your cursor close and firing will automatically hit them, which whilst helpful often felt to me like it’s taking away some of the challenges. Two primary weapons and a secondary make up your armoury, with the ability to change it depending on if it’s a shooting or exploration mission – but you need to be aware of what’s coming up and what you’ve selected, else you’ll be stranded with (for example) a mining laser that does nothing except smash up rocks. Not good for enemy ships! If you want an ultimate challenge, you can turn off this auto-aim, but it makes it very, very hard – I really wanted something in-between. 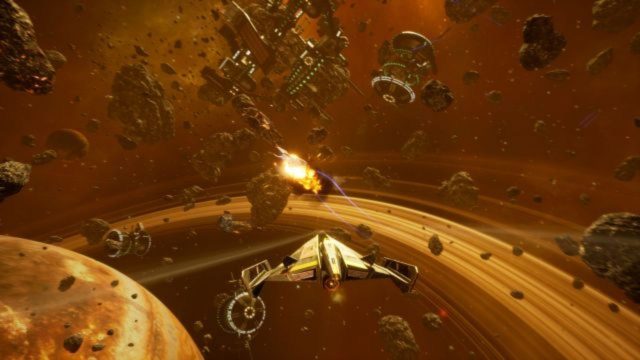 The space world is populated with decent looking space stations and space debris, which is especially pleasing given the heritage of being a mobile title. There are five worlds in total, each with a number of missions but as mentioned, most are go here, kill this. Whilst the auto-aiming exists to help to a degree, you will need to upgrade or buy new ships.

Between missions, the hanger is available which lets you do exactly that. You’ll need to be of the appropriate XP level in order to buy some stuff, but money is plentiful so you should be able to upgrade in most cases are soon as you are able to. There are some elusive ships that need blueprints (which you have to find in-game) to unlock, but whilst it’s nice to have the variety, I felt a bit like the game was forcing me down a path to get ship X for the next mission because my current one wasn’t powerful, giving the illusion of more of a grind than player choice of which ship I wanted.

Presentation-wise, the audio soundtrack is particularly good, with electronic beats fitting into the space-action, but as mentioned, a lack of voice acting limits the narrative to being told via text and pictures, which takes some emotion out of it a bit and I didn’t find it especially interesting, to begin with.

If I had to describe Subdivision Infinity DX in a few words to someone, I’d probably say it was a “nice little space game”. Is this a compliment? Well, yes. But I’m not sure if the developers wanted to actually aim for a bit more than that – it’s unclear – but perhaps now they’ve got the remastered DX out there, Subdivision Infinity 2 could challenge the bigger hitters.