Dustwind: The Last Resort is a bit of a tease. It doesn’t reveal exactly what type of game it is until you get into it a bit, and at that point, you become aware that it’s not building to a crescendo of excellence that you were hoping for.

So what is Dustwind? Well, it’s an isometric action-adventure game. The tutorial takes you through gameplay elements in short missions, where you learn to equip weapons, kill things, search bodies for new things, stealth about, and suchlike.

Once that’s all over, the real game reveals itself. You have Skirmish mode – you and your team of 3 other mercenaries try and kill the enemy. There are a number of modes, such as Team Deathmatch, and a capture-the-flag type mode (6 in total) which serve as a real opportunity to experience the core combat mechanic before delving into the campaign. The campaign though is an exercise in frustration. 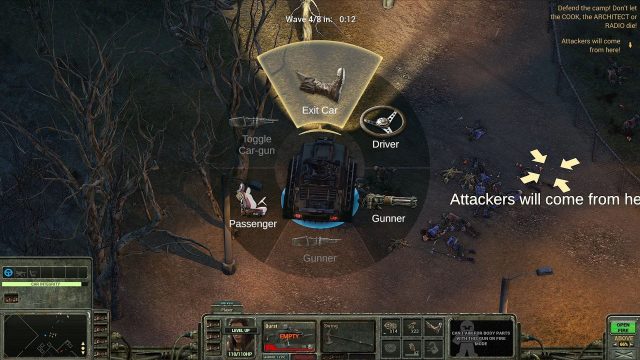 The mechanics you have learned also now need to adjoin to an RPG progression system and a story, set in post-apocalyptic times. The missions are very specific about what you need to do, and the story doesn’t always clearly match what you’re doing. It almost feels like two different games were developed and then shoehorned together. For example, the shooting mechanic has a Fallout-style limb targeting mechanic. It also has melee and ranged attacks, and combat can feel a bit Diablo-like if you play it as such. You’re then earning XP to level up, and searching bodies to find guns, using stealth to approach and sneak up on enemies, investigating objects. It has everything.

And maybe that would be perfect if the game was fun to play. Sadly, it isn’t. The control scheme is baffling, even after a number of hours with it, I could not get my head around why I was pushing the buttons I was pushing to do certain things (like holding a button to highlight everything I can interact with, then having to go and find that needle in the visual haystack). This particular example is so prominent because the visuals are awful. It’s a muddy, glitchy mess. And that’s when nothing is moving, as when something does begin to exhibit a motion, it’s really not good at all. Jerky, janky, with a poor frame rate – Dustwind is supposedly next-gen optimised.

There might actually be a good game here if it were not for the performance issues. It’s fairly apparent that it’s a PC game, ported rather badly over to console with minimal effort put towards the controls or power of those consoles to enhance the visuals. It was pretty embarrassing to play it on PS5 when you consider what it is capable of.

The potential is the best thing I could probably say about Dustwind. I suppose things may improve with patches down the line, but for now, I’d say check it out on PC if you want to get a better experience.