UnMetal is a bit like Metal Gear. I mean, that’s sort of the whole point, and the clue is also in the name. But, could a Metal Gear parody actually be any good? Surprisingly, yes.

UnMetal tells the story of Jessie Fox, who is imprisoned for a crime he did not commit. He is in some military-style prison, and the story is told by a narrator as if recounting his adventure. The tone of the game is set immediately with the comedic nature of the writing that throughout the game, manages to stay fresh and funny.

As Fox begins his escape, he becomes more and more wrapped up in uncovering a new war that is brewing and must stop it. He isn’t especially fussed about it though, so you’ll need to egg him on. Stealth action is the name of the game here, and the top-down perspective will instantly feel familiar to anyone who has played one of the pre-3D Metal Gear games.

Combat feels familiar, as you sneak around and take out guards and talk to NPCs. There is an upgrade system in play, which often gives you a couple of different skills to choose between, which will help define your playstyle. Stealth is always encouraged, however, as Jessie only earns experience for close combat kills, so whilst ranged shooting is an option, it is discouraged. The selection of skills does go some way towards making Fox feel like your own creation, even if the combat mechanics are a bit limited to games of yesteryear. 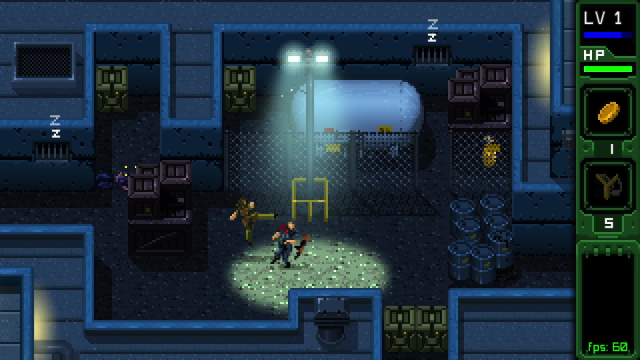 The humour element will keep you on your toes as you’re stealthing around, with Fox popping up with quick one-liners at points or recurring jokes. More occupied with taking shots at its inspiration, UnMetal doesn’t veer anywhere near as close to politics as Kojima’s franchise does, which I appreciated as you’re able to focus a little more on the action than reels and reels of cutscenes. Text is shown to be read, not listened to so skipping through is a little more at your own pace at least.

There are some mechanics introduced which also spice things up. You have the ability to heal yourself, as well as others. I assumed this would be a pointless skill to have, but at one point you’re told not to kill anyone, whereas shooting them seems like the only plausible way to escape. So downing them and then healing them is the only way to achieve it – it’s a nice little wrinkle that is added, and there are a few nice mechanics like this to uncover.

End of level bosses also offers some variation, although the condition you get to them can vary based on some choices you make. It’s usually picking a route, but things like the visibility of where that may lead are determined by the narrator’s recounting of events, with parts invisible until he remembers them. This is a cool feature and adds a puzzle element into the gameplay at times.

At points, the jokes do become a bit frustrating, but I didn’t find this too bad generally. For example, there are some instant-death sections, which are fine once or twice, but after more than a few deaths it’s really irritating, and it can feel a bit like the game is trolling you. Still, there’s enough here to keep it interesting, and enough fun gameplay to keep it exciting. And for a new but sort of old Metal Gear, well I’ll take that.