What happens when you combine Noah’s ark with a cunning rescue mission to save as many cats as you can? Isle of Cats, that’s what. Can you get as many cats as possible onto your boat before Lord Vesh rocks up and causes mayhem? Well, for the sake of the cats, let’s hope so.

Isle of Cats gives each player a boat with predefined rooms that you need to fill up with as many polyomino cats as you can over the course of several rounds. The Tetris-style cat tiles can be bought with fish and placed in your boat, but it’s not quite as simple as just grabbing whichever cats you want and moving on. At the start of each round every player is given their allocation of fish and a set of seven random cards. These cards also cost a certain number of fish, but how many you choose to keep and buy is entirely up to you. They’re potentially pretty handy though, giving you baskets to catch the fish with, secret missions to complete, chances to bend the game’s rules slightly and so on. Deciding how much to spend on cards and how much to hold back for your fish is a fine balancing act, and one which might need to be tweaked over time.

But once you have your cards sorted it’s time to rescue some cats. There are two piles to pick from, costing you either 3 or 5 fish depending on which side you choose. Each cat needs to go straight onto the boat, joining onto a previously positioned cat, meaning you can’t just chuck cats randomly around the place. You really want to try and cover up the rats and group similarly coloured cats together to maximise your points, and one really nice touch is the cat designs being slightly different from colour to colour, so those playing with some form of colour blindness will still be able to tell them apart, which is a nice touch.

The game progresses with players alternating turns until 5 rounds have been played, at which points the totals are added up to figure out who has complete cat families, treasures or point-earning lesson cards. If you’ve still got rats running around uncovered, or rooms that aren’t rammed full of cats then you’ll be losing a few points as well. The winner, you’ll be amazed to hear, is the player with the most points when it’s all shaken out. 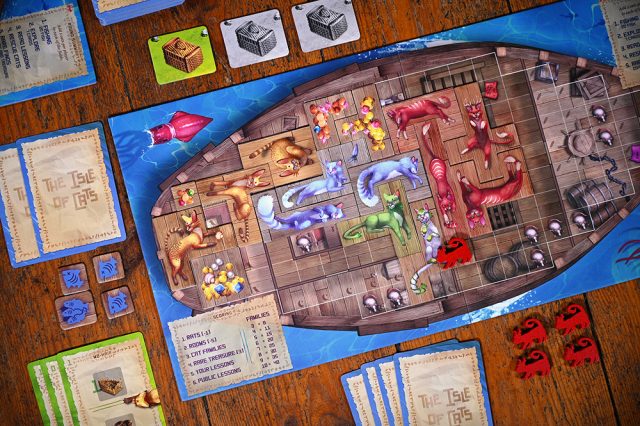 It’s not a difficult game to play at all, and before too long you’ll be focussing more on the strategic elements of your choices as opposed to just chucking fish onto your ship. You want as many cats as possible, but that means getting rid of more cards at the start of each round which would usually leave you with some easy points at the end of the game. Not only that, do you grab the cat you need to complete your room, or pick one that doesn’t really benefit you but will mess up the next player along? There’s plenty of choices and decision to make, but if you want to forego all of that and play something much simpler then the family rules will serve you well. By getting rid oof most of the cards and taking away the forward-thinking strategic elements you end up with a game more suited to younger players who just want to pick some cats and plonk them onto the boat to rescue them. It’s really nice addition and one which will see this prove to be a much bigger family game than it might’ve been ordinarily.

As such it’s really easy to recommend Isle of Cats to anyone looking for a fun, short family game that’s easy to learn and has some really lovely art work. As a cat-owning family we had a brilliant time, and while we started with the family rules we soon moved onto the full experience and my 9 year old had a brilliant time. He felt sad that he couldn’t rescue all of the cats, but a few little reminders that it’s just a game seemed to do the trick.

And, as a final point to note, if you need any more reasons to buy this the lid even has a dedicated spot for your real life cats to curl up on and join you while you’re playing. Awesome.