Ubisoft’s current attitude of throw absolutely everything at a player and seeing what sticks, continues. To be fair, with Riders Republic it works more often than it doesn’t. Very simply, the game is about doing what you want to do, when you want to do it. You’re given a few different activities at the start of the game – a bike to road, a snowboard to, err, board. And off you go.

You’ve got the option of a third-person control system, or a vomit-inducing first-person one (which thankfully zooms out to third-person when you’re doing tricks and flips), with each activity having its own sense of handling. Biking seems to be the preferred standard for the game, it’s what you start with, it’s on the cover, and it’s the best way to get around most of the different environments that the game throws at you.

There’s a lot of environments too! Rider’s Republic features several real-world locations, all smushed together into one map. Desert areas, jungle areas, snowy peaks, dirt tracks – everything you could want is in here. Just meandering around the world only gets you so far though – events are what you need to do, to unlock stars that equal levels, which equal better equipment, and more activities. So the grind goes! It’s not a massive grind to be fair until you realise that the higher levels require hundreds and hundreds of stars – and the game in front of you is quite significant.

It won’t be easy either. Each event features a star for a win, and a number of challenges (usually three, for a star each). Winning is fine. Doing a 720 no-hander double flip is a bit harder. Each activity (usually a race, score attack or time attack) will tell you how to do the new trick that’s presented to you the first time, so that helps although does get a bit harder later. Sometimes you’ll be asked to collect a certain number of objects such as balloons, during a run – mostly, also fine. But then there are stars for things like winning on pro difficulty. This is much harder and often will require progressing, then coming back with higher level gear to complete.

This is the Ubisoft grind we know! What’s more, you can only fast travel ‘near’ to events, which still may involve some trekking, which can be frustrating after a time, but thankfully it loads very quickly on next-gen consoles.

The activities are a mixed bag, but thankfully I haven’t found any real stinkers. A snowmobile basically exists for quickly getting around snowy areas, whereas your bike is your main transportation on dry land. Finding lookout points is your main objective when you’re out and about, but the actual events are limited to the ‘core’ vehicles: bikes, snowboard or skiing, and flying.

This is where it gets really interesting. Each has its own nuances. Biking, given its prominence, looks incredible. The first-person view is next-level fun, and the handling is responsive if twitchy. For my money, on PS5, given all the haptics available, it doesn’t quite feel like you’re riding a dirt bike down a track. There are some technical stunt modes for the bikes, which are sort of like Trials 3D – you need to ride your bike across a very tight series of obstacles. Things like pipes, logs etc, and jump between them. These are exciting, but they do highlight the problems of the handling model and its twitchiness/over sensitivity. 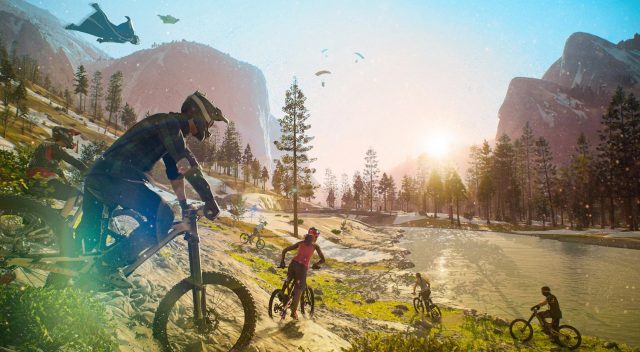 The boarding and skiing are perfect. This isn’t a surprise given the team’s pedigree on Steep, although it does make you wonder why they didn’t perhaps double down and go for Steep 2. The snow is great, the ‘swishing’ is great. Both the snow and wheels controls are the same, both employing the same trick system. You can map it to rider mode (left stick steers, right stick views, and face buttons jump) or trick (left stick steers, no view adjustment, right stick does the tricking). When you’re in the air, either the buttons or stick depending on your scheme will decide the momentum used on your rotation. I found this nigh-on impossible with the buttons, particularly with the landing assist turned off (which gives you more points but is obviously, harder). Holding triggers and tilting the left stick does grabs – whichever scheme you’ve gone for results in some mental gymnastics which isn’t easy at all to get to grips with, but rewarding once mastered. Most points however are awarded for the most eccentric amount of spins and grabs you can do at any point, rather than a slow and steady, finessed 360. Oh well.

Flying is a whole different beast. Rocket suit is just that, with some wings and a rocket on your back. You fly through a series of hoops (again, first-person is immense) and try not to crash into anything. The wingsuit is the same deal but without a rocket. Here, you’re launching yourself down a mountain, trying not to crash but trying to get as close as possible to the ground without hitting anything. It’s white-knuckle and comes the closest to ‘extreme’ as anything in Riders Republic gets. Again, the handling is precise enough but seems to lack momentum going from side to side as you’re zipping through the air. Maybe that’s just my preference.

All of this is wrapped up in the Ubisoft classic – a million icons on a map to go and visit. Colours everywhere, stuff constantly unlocking and being fired at you. It’s overwhelming. Ignoring it to a degree is the best thing to do, progressing at your own pace. Oddly, whilst you are earning more gear for your events, the in-game store is limited to only a few items, all available for some in-game currency or paid for real-world money. This is a bit gross. I wanted to have my rider stand out a bit, but the store only had some lame looking stuff. Got to wait for another day.

Some events go crazy though, and rather than just another race, maybe you’re racing another 10 riders all dressed as giraffes. Maybe instead of a bike, you’re on an exercise bike. Spoiler: it doesn’t go anywhere fast. There are an awful lot of riders on the map, but it’s taking cues from the Forza games with the Drivatar element – strapping real-world gamer tag names to NPCs. There are also real people about, which is nice (and you can check the icon to tell them apart) but joining in with them is a bit of a hassle. Grouping up in a multiplayer event seems to let you only ever challenge the group. I was expecting to be able to matchmake into bigger groups, or at least do me and my buddies in the AI races. There are some options to do this, but it’s a bit limited (and not obvious).

You can have some big races in the ‘mass race’ feature. This is you and a vast number of other human racers, bundling down a hill all at once. It’s absolute chaos. Gates have you switch between bike, snowboard, ski and flying, before changing back, and taking part over a number of rounds. There’s just a few too many for me, it’s hard to see what’s coming up unless you get an early head start, and given the volume of players, this is pretty hard. A rewind function helps, but it rewinds of course only you, so you’re doubly penalised for any mistakes. Sadly, these aren’t on all the time, with two hosted (roughly) every hour it seems.

All in all, Riders Republic is a really fun, and very large package. I haven’t touched on the story and voice acting (which is just the absolute worst dude-bro extreme sports drivel you’ve ever heard) so best off ignoring that completely, and assuming you’re ok with the handling (it’s definitely passable at least) you’ll have a blast here.