Another year, another Call of Duty game. But this year, we’re going back to where it all started – World War 2. Fret not, you’ve probably got the dread like I had when I first heard about this, but Vanguard is brilliant.

Call of Duty Vanguard is split into three components for gameplay: the single-player campaign, the multiplayer arena shooting, and the co-operative, PvE zombies mode. Your mileage with the game is going to vary depending on how much you like each/any of these, and how receptive you are to the variably quality of each. Think of this then as a three-part review, with an overall sum up at the end with my subjective scoring. Let us begin.

Vanguard tells the story of a group of six special forces Allies who are tasked with infiltrating the back lines of a Nazi operation to steal some secrets. This is an alternative timeline of World War 2, but everything you know up to the start of the game persists – the Nazis are the bad guys and they really, really suck.

The game doesn’t hide this at all. They’re really bad, and it’s uncomfortable to the point of I wondered how this might be received in Germany. Nonetheless, your team of six is a varied crew, each from a different country. You have Arthur, the man in charge – a black guy who is Cambridge educated, much to the disdain of the Nazis. You have a white English guy who follows Arthur without question, a woman sniper who was infamous in Russia, a reckless American, and an insensitive Australian rounding out the notable ones. They’re all played to stereotypes fairly strongly, and I felt it positive and progressive that they’re positioning a black person as the lead character in the game.

I’m not qualified to talk on race at all, but to my naive eyes, it’s problematic here. The issue is that the real racial tension from the time is not reflected here at all. The Allies are super tolerant, have absolutely no issue whatsoever and America’s 93rd division (the only Africa-American one) is represented, but rather than a comment about the horrific treatment they received, they just pop up to help teach the white American a valuable lesson. The Nazis though, oh boy, they are some super racists. At every opportunity you’re told how the good guys are one-for-all, no issues or clashes whatsoever (aside from a few remarks from the Australian, rude), and the Nazis hate everyone. And we hate them!

Anyway, stepping aside from the political landmine, the birth of this special forces team is told in flashbacks to the main narrative, with the player becoming each of them for a level or two. Each level is World War 2 dipped in Call of Duty spectacle – loads of people get shot, loads of stuff blows up. And it looks absolutely amazing. As in, really, really spectacular. The first level has you jumping between trains at night in the pouring rain, taking down Nazis. Later levels have you deal with snipers in snowy Russia, fight as explosive experts in the desert, classic hill fighting, and more, each with incredible set pieces. 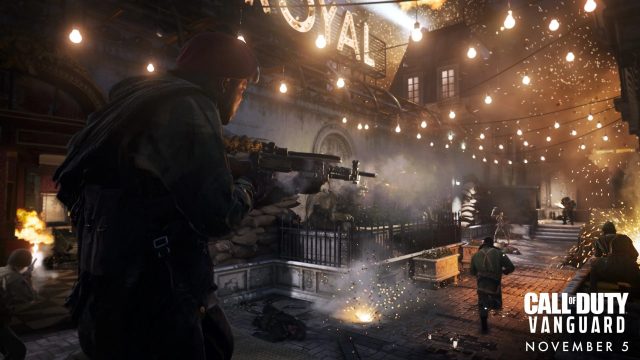 It’s very ‘on-rails’. Gone are the earlier Call of Duty’s explorative elements, you’re going one way mostly, and you’re going with force. Lines are shouted from characters, with decent voice acting but terribly written dialogue, but thankfully there are enough explosions to drown them out.

Each character has their own mini-ability. Arthur commands his crew to shoot stuff and Polina uses mirrored glass to distract snipers for example, but these are fairly minor touches that add a little to the experience of playing different folks. I actually enjoyed playing Polina (the Russian sniper the most) as her backstory is most filled out, and she’s quick and nimble, able to dash into small holes and out again, which played well to my preferred stealthy approach.

It’s all in about six to seven hours, it doesn’t overstay its welcome, and it looks spectacular. Leave your brain at the door and have fun.

Multiplayer is brilliant. It should be noted here that Vanguard goes back to the Modern Warfare engine (rather than the spruced-up but still ancient Black Ops one). This is good, I prefer it, and it feels a lot more fluid and has more momentum. This means that door kicking is back, as is weapon mounting, so more tactics!

You’ve got a wide variety of guns, and gun attachments to fully customise your play style. This is similar to previous Call of Duty games, but again, it’s fleshed out and intuitive to use. Killstreaks are back instead of Scorestreaks (also a good thing) and they’re adapted to fit World War 2. At a high number of kills in a row, and you can call in attack dogs to terrorise your opponents.

Special abilities charge over time, so you can resupply teammates or send out a little old mini tank to F’ up your enemies. Most of your favourite modes are back to, with two new additions.

The first is Patrol. Patrol is a king-of-the-hill style mode, in that there is a zone and you need to stay in it to score points. The twist, however, is that the zone is in constant motion around the map. So you have to move with it. This is fantastic, eliminates camping altogether, and is such as simple tweak on an existing mode to freshen it up and be constantly exciting.

Champion Hill is the next, all-new mode and it’s a twist on the auto-chess format. For those not familiar, auto-chess involves a game type where there are eight people (or in this case, teams of two or three) and play each other in a round-robin format until one is left standing. The Call of Duty variant gives you a limited number of lives. You all play each other in turn, and teams drop out until one wins.

Money is dotted about the map and earned for kills – every three rounds, there is a buy round to improve your guns, buy perks, buy equipment etc. to help you towards the end of the game. The map is a big one, split into four separate arenas where every team fights their match at the same time – which is awesome as you’re sneaking around but can hear other fighting in the distance. Any odd team out if there’s not an even number can go up to the balcony in the centre and watch. It’s a change of pace, it’s interesting and exciting, and a welcome addition to the growing portfolio of multiplayer.

You can also select from the non-Champion Hill modes, a pacing option. This determines the amount of players in your game, be it small (6v6 tactical) to 10v10,12v12 all the way up to 24v24. Want carnage? Go Blitz, and have big games all the time, sometimes on maps that shouldn’t really fit that number of players.

There’s enough variety, customisation, challenges and modes to satisfy anyone who likes Call of Duty’s breed of fast-paced multiplayer shooting. The maps are mostly excellent as well; I still haven’t found any stinkers, so this is a home run for them this year I think.

Zombies sucks. I’m sorry to hit that one hard right away, but it’s not a good mode. The core, to be fair, is fine, but it’s so stripped back to what zombie players will be used to, that it just feels tacked on.

Previously, you had sprawling maps with secrets to uncover, weapons to buy and upgrade, and an underlying narrative. Here, there’s a connection to previous zombies stories, but you’re getting a basic map, and some things to shoot.

What’s missing exactly then? Well, there are no waves really. There are limited weapons, no hidden Easter eggs, there are a lot fewer perks to use, there are no unlockable sections by flipping power switches, no kill-streaks and local co-op play aren’t here.

You will run about in a moving zone (similar to Patrol) and shoot zombies until the round ends and you repeat again. There are a few different objectives but you play them on a loop. To be fair, I’m not really a CoD zombies fan anyway, but I got super bored super-quick of this. Activision has already apologised which is a sign of how badly this has been received, so there’s hope for improvement.

Summary – and the future outlook

So they’re working on it. Definitely for zombies, but for the multiplayer as well. New maps are coming, and they will be free. Bugs have already been squashed – two patches within a week, to fix some niggles (including a super annoying spawning bug that had one player spawn behind the whole enemy team and mow the lot down).

There’s a lot of promise here, but out of the box, you’re already getting a great package. Unless you’re exclusively a Zombies or campaign player, you’re going to get your monies worth I think and then some. Even without the upcoming content, there’s a load of good stuff to sink your teeth into already, I’m enjoying it a load, even though I’m having to try and forget some of the single-player narrative choices.