Football is life!!! Nope, it’s not the lovable Dani Rojas from the hit TV show Ted Lasso, Far Cry 6’s Dani Rojas is a rebel with an attitude, who’s also very good at killing people. This is good, as there’s a lot of people to be killed.

Set on the fictional island of Yara in the Caribbean, Dani Rojas witnesses his friend – and part of a local guerrilla faction – get murdered by the state military. Annoyed by this, Dani becomes embroiled in the guerrilla plans to topple the Yaran government, headed by Antón Castillo (played by Breaking Bad’s Giancarlo Esposito). He’s well suited to the role of a benevolent dictator, scarily psychopathic and fitting of the story.

Given the local and characters involved, you’d be right in assuming that Far Cry 6 has a very Cuban aesthetic. All of the characters have accents, as you’d expect, and the tropical location is supplemented by beautiful Latin music, at points interrupted by government broadcasts that help highlight the oppression of the Yaran people. It jarred with me a bit at first, but settles down and felt increasingly more like an authentic experience. Spending time in Far Cry 6 is serene, stunning, and exciting.

The prologue introduces you to the basics of getting around and blowing stuff up. Dani is a reluctant guerrilla, but on the small island you get a taste of everything – and it turns out that Dani is pretty good at it. Be it full frontal assault or stealth, Far Cry 6 sets out that you can play it how you want to, and gives you the appropriate tools.

Early on, Dani gets the Supremo. The Supremo is a jerry-rigged backpack that allows Dani to do stuff like throw Molotov’s, throw a baseball, a throwing knife, or let off a full-on mortar strike against his enemies. It’s a bit weird, best not to think about it, and as ridiculous as it looks, it’s an excuse to give Dani customisation on projectiles essentially. This begins your ability to spec your build – everything from deciding to take stuff like dynamite and grenades to EMPs or objects to distract people living in the Supremo. Even the super ability such as the aforementioned mortar strike can be swapped out for things like super EMPs which will take out all security systems in a flash.

Overpowered? Well after using the super ability, you must charge up your Supremo. You do this in the most Far Cry way possible, by killing people. Again, best not to think about it too much. You can customise the way the thing on your back in a first-person shooter looks, along with the rest of your appearance, which felt a bit odd until you realise there’s a photo mode. It’s actually pretty decent and always good to have in such a nice looking game. 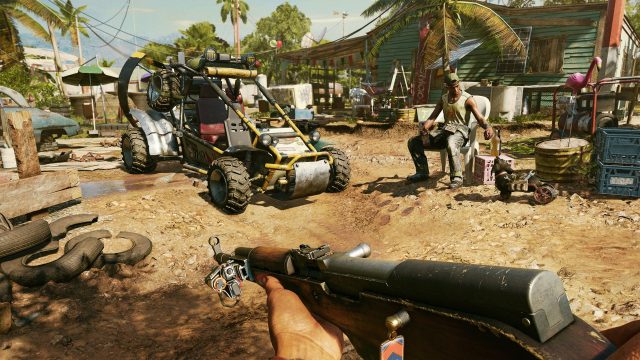 Weapons have loads of customisation options too, with resources you collect across the world all helping chip away at requirements to fit scopes, silencers, bigger magazines etc. Most aspects of Far Cry have a unique system to them, so there’s a lot to learn here. Even the enemies have different weaknesses, and guns have different bullet types. Some are best against flesh enemies, some better for armour piercing. This was a stretch too far for me – a headshot should be a headshot (and in fairness, it still mostly is) but every enemy has a health bar, and bullet sponge random evil NPCs isn’t really what I wanted from this game. Thankfully I’m a deadly aim with the bow and arrow, and not many enemies wear eye protection.

The prologue ends in spectacular fashion as you have to take out the enemies on two ships blocking passage to the main island. I did this completely by stealth, and it was amazing – from parachuting into the ladder on one of the boats to sneaking around and stealth killing them all. In an interesting twist, there is no skill tree in Far Cry 6. Every ability is afforded to you right away. There is a level, which is a bit confusing but it seems to be tight to gear you can unlock which is better for taking out tougher enemies in tougher areas, but being able to melee stealth kill someone from the air and spin right into an adjacent one within the first hour of the game is great, and a nice natural progression from last game (and it’s nice not having to relearn everything).

With the main island open, the scale of it hits you hard. It is absolutely massive. And with a big area to play in, there’s a large number of missions to do. The level of things to do is, in Ubisoft fashion, borderline overwhelming. This is a challenge with all their games, one they haven’t really managed to reign in – and it may or may not be something that bothers you. My approach is just to ‘get to it when I get to it’ and whilst slow seems to be working without taking a mental toll on me.

The island is split into three areas, each ruled by one of Castillo’s closest allies. Each represents its own questline, and you can do it in whatever order you fancy. The game mechanics evolve here too – each area has its own resistance faction, and you can choose what to build. There are a total of six utilities, but you’re limited to two per island. One lets you use a wingsuit, one lets you use the Hideout network (fast travel points) and there are others – again, factoring your decisions into your playstyle. There are other activities to do in these camps; you can start the single-player DLC content which is coming soon. You could also start a co-op game (you can do the whole game in co-op), or play dominoes. Yep, there’s a fully-fledged dominoes game embedded in Far Cry.

Thankfully, many hours in, I’m still finding new, and interesting things to do. Sure, it’s a lot. But a recent mission had me take a tank into a town to blow up propaganda billboards. Another had me catching a rogue ferret. Calling it a first-person GTA on an island feels like a bit of a disservice, but it’s the closest comparison I could think of. It even has driving races.

Far Cry 5 didn’t quite do it for me in the end, but 6 feels like a return to form. Maybe it’s just the island setting, harking back to the early Far Cry games. But it’s fully-featured, looks fantastic, there are loads of things to do – if you want a meaty, first-person shooter that’s close to the length of a second job (it really, really is a big game), then Far Cry 6 is the game for you.