It’s impossible to talk about Back 4 Blood without talking about Left 4 Dead. It’s by the same development studio, but this time around Turtle Rock Studios don’t have Valve involved. Instead, after moving away from their L4D roots with Evolve (asymmetrical monster hunting) they’re back with what is basically Left 4 Dead 2.5.

This feels like a really critical comment, particularly as Valve took development duties over for Left 4 Dead 2, and (deliberately?) trolled those looking forward to B4B by releasing new content for Left 4 Dead 2 eight years after their 2012 DLC. Is B4B really that similar to L4D?

To be clear, there is some fundamental gameplay mechanics difference but Back 4 Blood will be immediately familiar to anyone who has played Left 4 Dead, or a horde shooter. In essence, your goal is to get from Point A to Point B without all of your team of four dying. In your way stands a very large number of zombies (actually infected people called ‘ridden’) who are trying to eat you. You can have a primary weapon (assault rifle, SMG, shotgun) and a secondary (melee, pistol, sawn-off shotgun) to help you, and you can carry an offensive item (such as grenade, pipe bomb), support item (medikit, bandages) and special item (defibrillator for reviving dead buddies, stun gun for escaping zombie clutches). The action takes place in a first-person view.

It’s mayhem (in a good way). It looks nice, atmospheric, and zombie moans come from all angles as blood and guts fly everywhere as you smash your way through zombie hordes. It’s fast and with friends in co-op, it can be a blast. ‘Can be’ is a really important distinction here, because Back 4 Blood has a number of befuddling design decisions which impact enjoyment to the point of frustration.

Let’s talk the most hyped – the card system. B4B is split into four acts, each one containing a number of levels (Act 4 is just the final boss, however). At the start of your play-through, you select a deck of cards. These cards will be acquired the more you play through points earned and do stuff like turning your melee push attack into a combat knife stab (immensely useful), giving you extra health, to giving stamina and reload speed a boost. There are a lot of them, which means you can build all sorts of different decks, and tailor them to your playthrough. Each character has different starting weapons too, and benefits. So say you picked a character that has super-fast healing of other players and has a melee weapon – maybe you’d go for a melee build, giving you health on every strike against zombies, and buffing yourself so you basically become the team healer.

You select 15 cards, and are given one at the start, then draw five and pick one from those. At the end of each level, you draw some and pick one. This is a cool system. Except it’s not a card system really. You see, the cards are always drawn in a certain order. Meaning, that you’re basically just unlocking a customisable skill tree as you go. Sure, you may find yourself wanting to adapt your playstyle as you go depending on the weapons you find, but more often than not you’re committing to a build with your deck. So drawing and picking more often than not results in you picking the same cards, in the same order.

There are corruption cards too. These are modifiers on each level which change the things you’ll face. These are things like heavy fog, armoured specials (more on this shortly), a big boss to kill. You could find though that the randomness of this wrecks your run – committing to a melee build only to find a super boss drawn for you means you’re having a crap time as you rely on teammates. Still, it’s nice that each run, therefore, becomes slightly different. 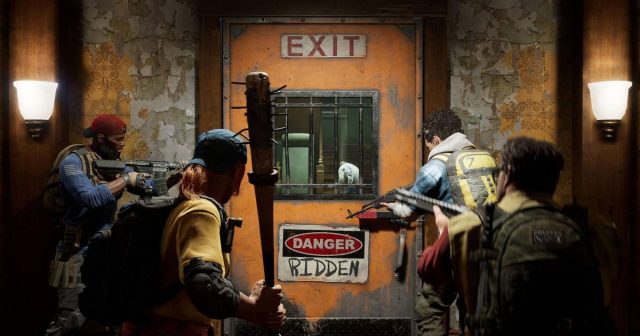 Let’s talk about the specials. Like in L4D, B4B has special infected. Unlike the one-hit zombies, these do things like grab you, spit acid at you, or hit you for massive damage. They are split into three classes: big boys with one big arm, big fat boys and agile pouncers. Each class has three different types, but the exact same silhouette. In L4D you could hear and see what was coming at you, and knew what to expect, how to prepare, how to react and defend. In B4B, if you see a big fat boy, he may get close and explode, he may charge, he may spit acid from a distance – you don’t know until a character yells it out. The names aren’t helpful easier, the worst offender being the Tall Boy, who is a sub-class of the, err, Tall Boy class. Yep, it’s a Tall Boy Tall Boy.

The worst thing about these specials is that there are constantly loads of them, spawning all the time and being fired at you. This is Back 4 Blood’s biggest problem, there is an unrelenting constant stream of zombies and specials being thrown at you with no respite. Sounds fun? It is initially but becomes a real slog. Left 4 Dead understood pacing, and apprehension. Back 4 Blood just goes all Jeremy Clarkson and constantly spawns everything around you, even behind you in areas you’ve cleared (zombies will literally spawn right where you’re looking at points). This has been acknowledged, and the devs have already implemented one hotfix to reduce the volume of specials. It is nowhere near enough. One time my team opened a door to see THREE Tall Boy’s staring at us. These are all bullet sponges at the best of times, if they’re armoured with a corruption card too, you’re basically looking at a total party kill in a close area. Frustrating. When your team groan “Not another fat one” you know there’s a problem.

Other annoyances then: specials have weak spots to hit which brings them down fast. There is either an incredible amount of snap-auto-aim (which can be turned off) or very little – which is a problem when trying to hit precise things, as it’s almost tuned for mouse control. Pinging items highlight this the best, as you have to be absolutely pin-precise to tag a special baddie or a pick-up for your team. If you’re playing Solo, you have the option for doing a Solo run – but you earn no Supply Points (which unlock cards) doing this, so your entire playthrough is limited to out of the box basic cards. You are essentially forced to campaign with randoms to make any sort of progression.

Some unforgivable ones: at the end of each Act, you will have found some good weapons, spent money between levels to customise guns, upgrade your abilities (carry more grenades, more effective health etc). Then you go back to the main menu hub world and start the next Act with absolutely nothing. Like they’re all to be played in isolation, as the campaigns in Left 4 Dead. It’s kind of ok, until you get to Act 4 – the big boss. This means you start it every time, with absolutely nothing. You can draw more cards, but any upgraded guns, abilities – all gone. You’re then limited to the starting weapons of each character, and whatever happens to be in that shop that run. If you start with a single shot rifle (the character who does extra damage to weak spots has this) and your only options are not good, you’re quitting out and reloading. Also, get to Act 4 with friends and you’re not the host? None of that progress saves for your game, so if you want to go back with a different group, you’re starting at the very beginning. Big bosses appear in the same place every time as well, which given the excitement of the ‘AI director’ is a downer.

Level design starts good – a big run to a ship, then back onto it is exciting and tense, and there’s an amazing level which I won’t spoil fairly early on which really makes you think this is worthy of carrying on the legend of Left 4 Dead. But it never tops it, levels are things like trailer parks, a mining complex, a swamp, some housing estate. Things like the stadium level in Left 4 Dead, the fairground, the shopping mall – exciting set pieces are seriously limited.

What else is disappointing? Vs mode. How can it be? Well, it’s basically an arena survival of four human players (as humans) against another four (who constantly spawn as specials). Round-based, whoever survives longest wins. Your mileage will vary I guess, my group of friends found it pretty boring and just contributes to the slog mentality of B4B. The campaign vs. mode does not exist here, which is a terrible shame. Given the pacing issues though, it’s probably for the best.

So, lots of problems, lots of annoyances. But why can’t I stop playing it? It’s so much bloody fun! Also, every issue I mention? All fixable. Every one. (Ok, maybe not level design but there’s always DLC). It’s frustrating to see everything underpinned by an aftertaste of annoyance, but the mechanics are all here, there’s a great game here, it’s just under the weight of itself. Once it shakes itself off, I think Back 4 Blood is going to be something special. For now, it ranges from an exercise in patience to fun moments.