There’s an interesting shift taking place in sports games right now, with the traditional faster arcade-style games being replaced by more realistic, slower-paced and more considered approaches. NBA 2k22 follows this trend with the seemingly simple introduction of a more forefront stamina bar, and coupling this with some interesting changes both on and off the court leads us to a game that is a genuine step up from previous versions.

Firstly, and you could argue most importantly, is the action on the court itself and this stamina feature I mentioned. As you run around the court your players are going to get tired, as you’d expect. This won’t just slow you down though, it’ll also impact how well you can shoot or distribute the ball – run around like a lunatic looking for a gap and you’re just going to fluff your shot at the end and give away possession, which isn’t ideal. Instead you’re going to have to use your team properly, using the slick passing options to stretch your opponents until you find that elusive pass or the half-second you need to pull off a 3 pointer. It slows things down to a more deliberate and thoughtful approach, and while it’s entirely possible to stage a lightning fast counterattack and delivery a spectacular dunk at the end of it, that’s not going to happen every 20 seconds. Essentially, we’re closer to a real game than we’ve been before.

Defending is great too, especially the new blocking system which makes your enormous players even more difficult to get rid of and means getting those close-up shots isn’t always going to be as straightforward as you might expect based on previous games. The physical characteristics of the players seem to really matter this year far more than before, and getting to know your team can really have an impact on how well you perform as a team.

You’ve also got a huge number of ways to play the game and get to know all of these new and improved gameplay mechanics. There’s the usual ideas of career modes, taking over a team and leading them to the top, creating your own players and following them through their career, even playing out a range of modes using the Women’s NBA if you prefer. But it’s the My Career mode that stands out in terms of new game modes, assuming you’re playing on a new console at least. 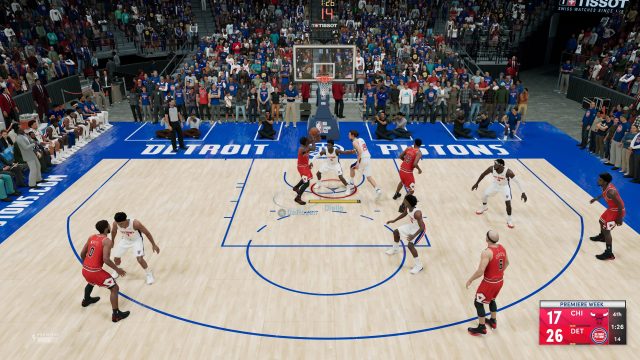 Having set up your character, there’s a range of events to carry out off-court to try and build up your popularity and brand, much like the Face of the Franchise mode in Madden this year. While you’re not playing a match you can explore the city around you, carrying out various career-boosting decisions like becoming a DJ or just messing around on your skateboard and enjoying the surroundings. It fleshes out what might have been a fairly run-of-the-mill career mode and makes you feel like you’re more in control of what’s going on with your career. There’s a few different things to do around the city, and joining random basketball games is quite cool, but it’s a bit thin on the ground and a bit of a pain in the arse getting around at times – you can tell this isn’t a skating game, that’s for sure. It’s one of those things that’s a really nice thing to have, and might be a fantastic way to play in a year or two when it’s been filled out, but at the moment it’s more of a “oh that’s quite nice” thing as opposed to anything that’ll blow you away.

While the action on court is pretty much on the money, the ugly scene of microtransactions pops its head up in various places around the game. MyTeam still allows you to drop your own cash into your team to bolster things a bit, and while that’s neither new nor a particular surprise, it starts to feel like you can’t move into another part of the game without a lingering offer somewhere to go and spend a few quid. At a time when microtransactions in games are under the spotlight and people are starting to feel a bit worn down by them, it seems surprising and a little disappointing that NBA 2k22 is insisting on pushing extra payments so much.

But if you can look beyond that, or just ignore it altogether and play without dropping in the extra money (which is how I’ve always played, and will continue to do so) and focus on the actual matches themselves you’ll find a lot to enjoy here. It’s a great improvement on previous NBA titles, the new stamina bar totally changes the way you might play and the improvements to defending and blocking mean that you’ll need to mix up your attempts to get anywhere. This is certainly worth picking up if you’re a fan of the sport, but I’m already looking forward to seeing how all of this can be tweaked, improved on and ironed out for next year’s game. It has potential to be spectacular.