There are two things guaranteed to feel satisfying when it comes to gaming: a shotgun in Doom, and a well-executed body check in an NHL game. No other sports game quite reaches the same level of joy as slamming an opposing player into the boards to put a stop to a nippy counter attack, and the sound of a puck pinging off the frame of the goal? Insert your own chef’s kiss gif here. But the NHL series has had a bit of a rocky time of late, sometimes feeling a bit unloved alongside its Madden and FIFA counterparts. This year though sees a shift to the top quality and aptly named Frostbite engine, and with it a whole new layer of shine on top of a very decent set of gaming options.

The new visuals don’t give blatant upgrades over last year’s game, but the ice now roughs up far more convincingly and there’s some nice light reflections to be had. Player reflections aren’t so well taken care of, but the players themselves look great and as long as you keep your attention focussed on the rink action (and you’d have to be a bit crazy to look away for more than half a second) the game looks every bit as great as you’d want it to. There’s some pretty crazy overlays going on, giving you some very bright stats whenever there’s a faceoff; I can’t make my mind up over these. They’re nothing like the info you’d see on any TV coverage and so nudge you away from that kind of realism, but I do like the stats update, knowing how many faceoffs I’ve won or lost, seeing my shot count increase as I ping shots in from every conceivable angle or whatever other statistics the game can pluck out of the air for me. Realism takes a hit, but intrigue wins.

The sound is mostly great too, with the commentators doing a cracking job of keeping up with things and the Dualsense controller’s speaker serving as an outlet for coaches yelling from the bench, whistles bringing things to a halt or the aforementioned zing of a fierce wrist shot smacking against the post. The Dualsense goes a few steps further as well, giving you feedback on your passing with R2 as your players get more worn out, and utilising that amazing haptic feedback to help you feel every stumble and every hit your players suffer from. It’s great to see 3rd party developers making the most of this tech, and NHL 22 does it very nicely indeed.

Gameplay wise, NHL is every bit as fast and frenetic as you’d expect it to be, and one small lapse in concentration or one missed tackle could result in the other team getting a chance at bagging a goal or three. Unfortunately with the AI seemingly able to find the smallest gap under your goalie’s pads it can result in a frustrating few moments, and while I’m happy to put some of that down to me just being a bit rubbish at scoring, it sometimes felt like I was at an unfair disadvantage – I could spend two periods of the game bombarding the opponent’s goal with a range of shots from all over the place and never get close, only to be hit by one quick attack that flies into the top corner. But that just drove me to be more considered in my defending methods – satisfying as a brutal body check can be, it’s not always the best way to get the puck back and trying out the different options there can really help keep the other guys at bay. Aside from the odd frustrations, the gameplay itself feels really good and the framerate remained solid no matter how much chaos was unfolding on the ice. 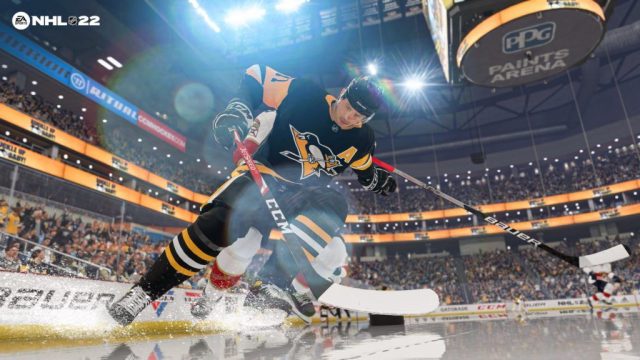 If it’s game modes you’re after, NHL 22 has you covered with enough options to keep your going for a long, long time. The Be a Pro Career mode has been a favourite of mine so far and where I’ve sunk a lot of time, giving you a story to play through and plenty of options along the way as well, and while I haven’t spent as much tie in the Franchise mode it’s very apparent I could spend most of the year playing at being the club’s GM and barely touch any other part of the game. There’s also the regular assortment of one-off games, 3-on-3 options and even Ones Now, a 1-on-1-on-1 mode which was quite fun but baffling at first.

But the elephant in the room is, as is increasingly the case, the Hockey Ultimate Team. The pay-to-win mechanic is still in force here, and while it’s entirely possible to enjoy the HUT without dropping any real money into things, it’ll make progress much slower. I still enjoyed it, as I enjoyed the Madden and FIFA UT modes without dropping my own cash into the game, but it’s becoming harder to ignore the whole microtransaction thing, and it’s surely a matter of time before the UT modes get a rethink. It’s shame to focus on the negatives too much because it’s a great way to play the game, but coming up against an online opponent who’s clearly got a team that cost them a good chunk of real money can be a frustrating moment. If you want a more balanced online mode you can opt for a regular game, or give the World of CHEL a go where you can make your own player and take them online to play with, or against other players.

And there’s more. Seriously. I could go on all day about the different ways to play this.

But let me mention one other big thing instead – the Superstar X-Factor abilities. Each team has a small number of players who can turn a game on its head with a special ability, be that a speed boost or being able to deke at pace without losing control. Getting to know your players therefore gives a real advantage during a game, giving you a strong focus for trying to work the puck to a certain player, or trying to nail an attacker with a brutal check from your star tackler. This idea of knowing players works in other ways too, and taking a look at other teams – their keeper’s weaknesses especially – is certainly a useful exercise.

So how can we sum up NHL 22? Well, it’s undoubtedly one of the best hockey games we’ve had in a long while. There’s fast-paced and intense action on the ice, some lovely new visuals and the same incredible satisfaction when things go your way. Sure there’s a few frustrations, the HUT money-pit and some occasionally over-punishing AI plays, but there’s so much to do within the game it’s easy to forget the issues, and I’m still holding out hope for a patch or two to balance things out a little. Let’s face it, this wouldn’t be the first sports game that’s had some tweaks after release. And the age-old question of whether I’d recommend it if you had a previous version? Definitely. NHL 22 could be just the turning point the series needs to get back to its best, and if you’re a fan of the NHL or ice hockey in general, this is definitely a game for you.