Catty and Batty: The Spirit Guide is billed as a cooperative family game. As hinted, you play as a cat or a bat (or both, if playing solo), and is a fairly short but visually striking, simple, and pleasing gameplay experience.

The plot is simple. Catty and Batty are mates but are woken up when forest spirits bump into them. They’re lost and want to get home. It’s your job to assist them, and you do this with a very simple gameplay mechanic.

The game is played from a top-down perspective, with a level made up of an invisible grid of squares. The spirits spawn and walk in a straight line – it’s your job to direct them to a cave that will take them home. You do this by placing a block on the grid, which diverts the direction the spirits are running.

The promotional material for Catty and Batty references Lemmings, and this is on the money – only you can only ‘block’ (for reference, the Lemming blocker diverted the direction of a Lemming). Chu Chu Rocket is probably a slightly more apt comparison given the directional nature of the game. In fact, this is your only command – dropping a box in front of the spirits to change their direction. 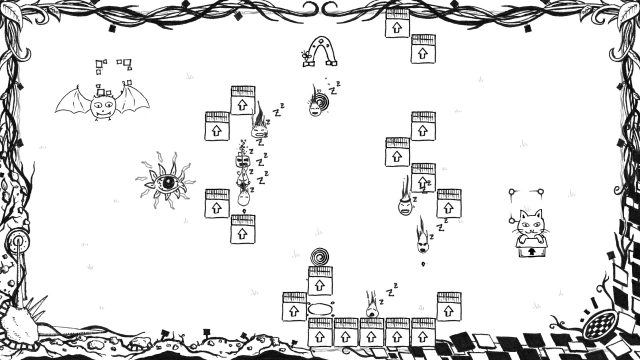 Somewhat confusingly, the boxes you drop all have an up arrow on them. It was mildly frustrating to learn that despite the boxes having an upwards arrow on them, this is just for decoration (‘This way up’) and doesn’t determine the direction of the spirits. So blocking their path may result in them going either left or right, so will take some planning to deal with this random nature.

Further challenges lay in your path – you have a limited number of boxes on most levels. There is a variety of mechanics too, one level will have teleports for the spirits, others may have vines that block Catty or Batty from passing through. This is where the character switching (or co-op play) becomes important, as each is limited to only a certain part of the level. There are thirty or so levels in all, and only a small handful actually ever required switching characters, so if you’re playing solo, it’s really a matter of preference as to whether you play as a cat or a bat (cat, obviously).

I had a little go co-operatively, and it’s very much a ‘play together’ game. You have the same, single goal to work towards, and one player could do most of the work all on their own quite easily, but it’s supposed to be a shared experience, so probably really well suited for parents and children (or experience and novice gamers).

It helps also that the game is really striking. Everything is hand-drawn in black and white, like a series of doodles coming to life. All the menus, screen surrounds for the levels, transitions – all drawn freehand seemingly. It looks absolutely fantastic without being overwhelming.

Catty and Batty is a really fun, little game. It’s short, but striking visually, simple yet engaging. The random aspect of how the spirits bounce of boxes is mildly annoying but it doesn’t overstay its welcome or detract from the overall experience.