A few years ago a new game mode was added into Rainbow Six Siege for a while, letting players crack on with a new PvE Outbreak option. Outbreak had players battling against an epidemic which was causing various nasty monster-type things to take over the place. Fast forward to now, and Rainbow Six Extraction is a fleshed out experience which takes heavily from the Outbreak mode and gives an interesting take on the Rainbow Six formula.

Extraction has you head into infected areas in teams of between one and three players to carry out series of objectives, wipe out the various infected monsters that lurk around and, most importantly, get out alive. Each area is split into 3 sections which you need to get through before entering an airlock which acts as a chance to reset, take stock, remember to breathe and move on to the next part of the level. The more objectives and nasties you take care of the more XP you’ll rack up, but as the name suggests it’s the extraction that reaps the rewards – get taken down during a mission and you’ll lose whatever you’ve earnt during the mission in hand.

That’s not to say it’s the end of the road for that operative though; next time through you’ll get the option to rescue your fallen characters and get them to an extraction point to claw back some of what you might have lost. It’s a nice mechanic to have in place and means that failing doesn’t necessarily mean failing completely, as well as giving you something else to think about the next time you head in to sort out the objectives. The level design is great too, mixing open spaces with tight indoor areas to give you a range of challenges and considerations while you try to keep safe. It would be nice to have more locations to work through – there are four main locations in the game – but they’re wonderfully varied and look great. 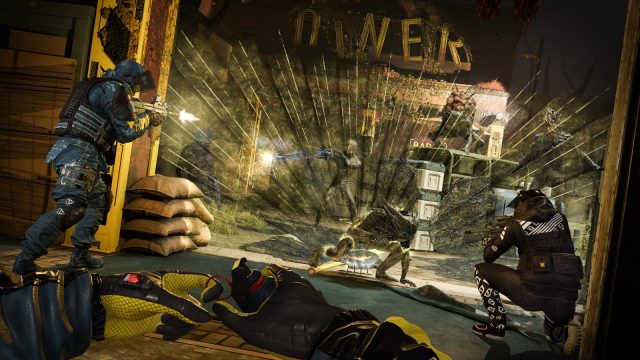 It does take a while to figure everything out, however. The tutorial throws a lot of information at you which would be fine in small chunks, but ends up being overwhelming and easy to forget. As such this ends up being one of those games that you learn by playing, messing up, and figuring out why it all went wrong. Luckily it’s not a complex game to play, but it’s easy to miss the importance of stealth, or miss something to do with how the objectives can be done in an efficient way. Teaming up with someone who’s got a few hours of Extraction under their belt is a far better way to learn the game, that’s for sure.

Visually Extraction is a pretty nice, and the way the black sludgy infection spreads around the level as time presses on is a really cool touch. It’s not just a visual effect either, with the infected areas slowing you down – something that can be particularly problematic if you get caught out by a large number of enemies and want to make a run for it. That is, obviously, if you see them coming. The first time a massive creature bursts through a wall right in front of you without you even knowing they were nearby is a moment you probably won’t forget for a while, and when you know it’s a possibility you won’t sneak your way down a corridor with quite the same level of swagger again. It’s a bit of a shame that the creatures you’re fighting are mostly a bit generic, I guess there’s only so many ways to make an infected monster look nasty, but they start to feel quite samey after a while.

There’s clearly quite a bit to like in Rainbow Six Extraction, but my main question mark sits over the question of how long people will want to keep coming back for. While recognising the success of a single temporary game mode in Siege is worthy of credit, I’m still not convinced it’s enough to have made a whole new game out of. Maybe added content later on will change my mind, and maybe those who really loved Outbreak would find more reasons to keep plugging away through the same areas to mop up as many of the varied and random objectives as possible, but while I enjoyed what I played I can’t see it being a game I stick with long term. I suspect that’s the reason for the lower price of Extraction compared to other new games, but it might make some people feel a bit short changed.

Overall though this is a fun game to play with friends. It gives some good doses of tension, some nice varied ways to play and the extraction idea works well in the setting. I just have those questions over the longevity of the game, and instead of seeing the lower price as a bargain you should definitely go into this recognising it reflects the slightly lighter content on offer. Still, if you’ve got friends to play with then this has potential to be a lot of fun.