Mushroom Wars 2 has a bulging esports community. Who knew? Not me, that’s for sure. Writing this off as another slightly weird, low budget quirky ‘little game’, what I got was a well thought out, considered, and developed multiplayer title with a large campaign. Who knew? Oh, it’s also great fun.

So what’s the deal? In Mushroom wars you have a base, your enemy has a base, and there are a number of vacant bases across the map. Over time, the number of troops in your base increases. You can then either ‘spend’ troops to upgrade the base, which makes them create troops faster, or to take over vacant (or enemy) bases. The goal is to take over all bases on a map.

To do this, you select a base from which you want to send troops, select how many you want to send (by a percentage, either 25, 50, 75 or 100) and tell them to go and take it. Vacant bases have a set value on the map, if you have enough troops going to get the base, you’ll capture it. Enemy bases work the same way, but of course, they are creating new troops all the time like you. Each action like this represents a mini-battle which is played out quickly on the screen, with a ‘biggest number wins’ scenario.

Multiply out the chaos, and you can see how it becomes quickly strategic. You’re moving troops from base to base, the enemy is doing the same, leaving no base too low on troops but enough within reasonable proximity to mount a defence in case of an attack. Bases call out ‘SOS’ if enemy troops are sending a barrage their way, which may or may not be too late. Fortunately, you have some tools to help you. 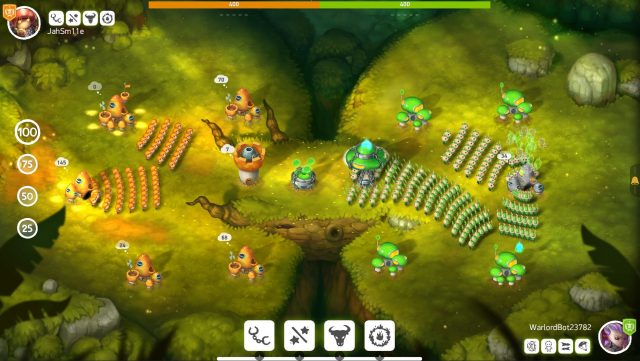 Firstly, it’s all top-down and played like a simple RTS, so you have total visibility of the battlefield. Secondly, you have two systems at play – one is abilities, the other morale. Abilities ‘tick up’ over time, which can help you do things like improving the defence of a base, or improving the speed of your troops. This is handy to have in a pinch, for sure. Morale grows depending on your success in battles or drops in losses which in turn gives you an attack or defence boost. So sending a load of troops into a base just to get their number down a bit in preparation for a future assault is fine, but it comes at the cost of a loss and a morale hit (and a boost to your enemy).

The final complexity is the building variation. Bases create troops, but they can be turned into towers – basically your classic, area tower defence style. But, they can’t generate troops. Still, it’s excellent to see an army of just the right size heading toward a vacant base, only to be whittled down and lose a battle. Forges can also be built, which add an attack and defence multiplayer based on the number you have. Like towers, they won’t produce troops but will bolster your overall war effort.

What you end up with, is an incredibly tactical (and mathematical) strategy game, played out with a vast number of troops on-screen in sessions that last handfuls of minutes. Incredible! It’s a blast, although I was convinced it felt more suited for mobile/touch screenplay. Sure enough, it was out on mobile and Switch many years ago, but is now making the jump over to Playstation. Free of the mobile ads and ‘hooks’ (it’s free-to-play) Mushroom Wars 2 does feel better because of it, but the price tag is still a bit steep – so there’s a trade-off. On the plus side, after downloading the mobile version to try, I think I actually prefer the controller version – it’s certainly easier and quicker to direct troops at various percentages and trigger abilities, plus all of the colours and look of the game really pop on a big TV.

What about the look? Well, it’s set in a mushroom kingdom, where each troop is a…. Mushroom. Look, it’s weird. Seeing what is basically a grizzled Toad from Mario kitted out in a sword and shield is a bit odd, but it’s not ‘out there’ in the grand scheme of video games. It works.

One thing that Mushroom Wars 2 boasts, is that it’s ‘tournament ready’. This means that it is balanced, and has a league system and ranked matchmaking. It also has a replay feature, a spectator mode, and the ability to play with up to 4 players. It’s surprisingly well-featured. What this makes for is a fleshed-out total package. And that’s before you even get to the campaign, which features well over 100 missions, and consider the different Hero classes each with different battlefield abilities.

There’s way more to consider than I gave it credit for at first glance, and I’m glad I peeled away a few layers and gave it some time, as it’s been a great time so far. I’m upstairs playing on Playstation, then I’ll go downstairs to watch some TV and play the mobile game. That has to be a positive sign.