Shooting Nazis in the testicles never gets old, does it?

To be honest, if that sentence makes you think “Hmm, that sounds like fun” then you’re going to love Sniper Elite. If it doesn’t, you’re not. That’s pretty much the review. Ok so there’s more to it, but if you’re not ok with gratuitous sniper violence, then score this game low and turn away. If you are, read on…

Sniper Elite 5 builds on what the series is best known for, and refines and deepens the core mechanics. Starting in France, you play as Karl and start to help out the Resistance. I can’t tell you much more than this as the plot is so mind-numbingly boring that you’re not going to care. There are a lot of cutscenes, all of which are terrible and dull, and serve only to break up the sniping of Nazis in their faces.

The levels are built a bit like Hitman, in that they’re open-world environments with a variety of missions and optional sub-missions for you to complete. The twist here is that they’re not really an open world, they’re big levels with a number of fairly linear paths. On one mission I had to navigate a wide-open space with a sniper nest at the top. Rather than sneak my way around I had to go through a specific opening in a hedge, and then do what the game wanted me to do. You’ll have limited opportunities to play it your way.

I struggled to work out if Sniper Elite is a stealth game. There are a lot of stealth mechanics – enemies being made aware of your presence, suppressors on certain weapons, alarms being sounded – but your primary weapon is a super loud sniper rifle. You can use explosions or planes in the sky to mask your shots, and you can also use your shots to make them aware of your location before you change position, giving them the runaround. But despite my best efforts, getting in and out without making anyone aware was impossible.

The stealth mechanics fall over with some sketchy cones of visibility from NPCs but generally, you have a reasonable idea of what you can and can’t get away with. The curated approaches to different hot spots ensure that encounters take place as intended by the developers but annoyingly it will mean if the game doesn’t want you to stealth, you’re not going to.

Still, the levels are expansive and I certainly had the impression I could play it how I wanted for a large part. There are a lot of comparisons to Hitman, such as setting up mines or waiting for enemies to walk toward makeshift traps to kill them, an on-the-fly plan coming together. Annoyingly though it’s absolutely riddled with bugs. After doing all objectives on a level, with one left before my escape I set out to kill a General in a car. He hadn’t spawned and his car was just sat stationary. Another one was where I sneaked up on a machine gun nest, and took out 3 Nazis, only for more to rush towards me. As I’d knocked them unconscious, they started waking up, only the animation was trapping them in a constant falling-over state. I couldn’t work out who was awake and not and ended up having to shoot the whole lot. 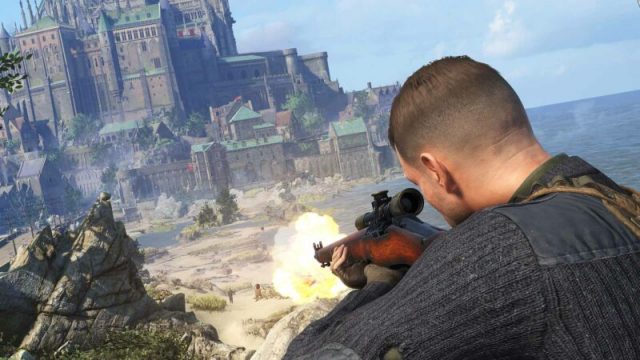 Let’s get to what you’re here for. The sniping. Well, it’s pretty good. Distance, wind (on higher difficulties), and travel time all have to be taken into account. When the bullet connects, you’re treated to some gratuitous x-ray violence of the bullet smashing bone and tearing up ligaments. Want to pop those Nazi testicles? Go for it. Maybe it’s my age though, but it feels a bit… gross.

I can’t work out the tone of the game really. It’s a serious, WW2 shooter. Only the sniping x-rays are extreme Mortal Kombat levels of gore. You have a bland cutscene, scope out a baddie, learn a bit about him (conscripted to the war, misses his kids), and then explode his head like a melon. Am I supposed to feel bad about killing them? Or good about some and bad about others? I’m conflicted. Maybe that’s the point.

The tension is cranked up with the invasion mode, a Dark Souls-esque thing where you can invade a player’s game as an enemy sniper. This is really cool, although as I was dropped into a level as a bad guy, I never once found a human player. There’s a co-op and PvP mode as well, although the latter highlights probably the worst bits of any shooters online – lots of camping unless you want to expose yourself to Sniper Elite’s run-and-gun gameplay, which is by far its worst bit due to some slightly eager controls.

As the brain matter settles, I’m a bit torn on whether to recommend Sniper Elite 5. It’s definitely not terrible, but it’s probably not brilliant either, and whether it’s a ‘must play’ comes down to your patience for bugs, desire to shoot Nazis and how bothered you are about a plot.