The Lego games are responsible for my son’s love of video games, and while I’ve had an amazing time joining him on his journey into the world of gaming, there was always something missing in amongst the adventures that we were having. That missing element was the one thing that made us love building Lego together in the real world, and that was the actual building itself. So imagine a game whereby we could enjoy a sense of adventure while also getting to build structures and put our real world Lego skills to the test… That game is Lego Bricktales, and while it can be a little fiddly and awkward to build your creations, the fantastic mix of typical Lego humour and on screen brick based engineering is a genuinely wonderful experience, even if slightly frustrating for the younger players.

The story of Lego Bricktales is based around a young adventurer and his Grandfather, the latter of which owns a theme park which has become run down and dilapidated overtime. In order to save the theme park and prevent the land from being sold our young adventurer needs to travel through a series of gorgeous dioramas solving problems, fixing broken areas, finding vital Happiness Crystals and generally being an all round hero type. In the opening moments of the game you will work through a tutorial which does an excellent job of teaching you how to build, how the various controls work, and how to ensure your structures are strong enough to succeed in whatever is that you need them to do; this might be something as simple as building a staircase which has fallen apart, or putting together some simple structures that aren’t quite how they need to be, but before long you’re building bridges, helicopters and a range of other cool builds using nothing other than your own building skills and a decent sized chunk of trial and error.

While the tutorial does an impressive job of teaching you the controls behind your building, it also highlights just how frustrating it can be to try and precisely move the bricks around and position them using a console controller. If you take your time, and exercise patience, you can use the flexible camera to ensure that your bricks are landing exactly where they meant to go, but anyone who’s ever played a game with a younger gamer will know that patience isn’t always in abundance. As such it’s quite likely that a less experienced player might give up on some of the more challenging tasks, which makes it something of a shame that there isn’t a hint system in place or some kind of Lego style instructions to follow. 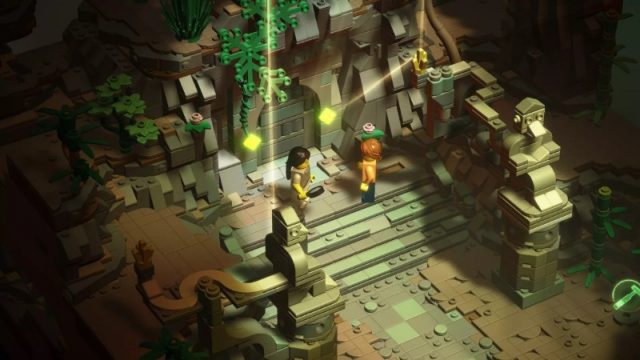 But to focus too much on the small frustrations in the controls would be a shame when the game as a whole is such a joy to play. If you’re willing to take your time, experiment, and dig out that lateral thinking that you haven’t used since you were a kid delving through a box of Lego bricks to build that amazing car that you needed, you can make some really nice things they do exactly what you need them to do. That’s a good thing, because it lets you enjoy the story, the jokes, and the general beauty of the game. We’ve had good looking Lego games before, but the miniature biomes that you travel through on your journey to get this theme park fixed up and mended are some of the prettier sites you will see in a game essentially made up by lots of small plastic bricks.

Joining you on your travels is a small robot which your Grandad initially launched into space, and has managed to find its way back to help you with your quest. This robot can be upgraded over time to gain additional abilities which will help you move further through the levels as well as gaining access to certain areas that were either hidden or inaccessible earlier in the game. It also comes in handy when testing your builds, by providing movement or force in certain places to ensure that your finely crafted vehicle, bridge, or whatever else won’t fall apart the moment you try and use it in the actual level itself. This really helps to emphasise the real life physics going on while making your Lego creations, and if a build would fall apart under stress in the real world, it’s extremely likely to fall apart in the game as well. Trying to remember all those episodes of Lego Masters that you watched where the competitors built incredibly strong structures could make a difference between your awesome looking bridge holding out or collapsing in a way that makes it appear that you’ve never even touched a Lego brick before…

So with all this in mind I really enjoyed Lego Bricktales. Sure it can be a little bit clunky to get the bricks to go where you want them to go but once you get past that and learn to take your time and use the camera to your advantage it’s the closest we’ve ever come to a Lego game where you actually have a huge amount of control over what you’re actually building. The challenge of a limited number of bricks and the need to come up with a particular solution to a problem will pull your brain in directions that it hasn’t been for a long time, with some more complex challenges becoming something more akin to an engineering task, making the feeling of elation when you finally complete it all the more enjoyable. So whether you’ve got kids that you like to do Lego with or even if you’re a Lego loving youngster yourself, there’s a lot to love about Lego Bricktales. If you want an opportunity and an excuse to build Lego in a way that you possibly have never built Lego before then Bricktales could be the way forward. It’s very enjoyable, and easy to recommend.