One thing has always stopped me from spending a lot of time on the Switch: I really dislike the Joy-con controllers. Between the small and sometimes inaccurate analogue sticks, the shoulder buttons with next to no travel and the near-guarantee of stick drift creeping in, I’ve genuinely no idea why people seem to suggest they’re some of the best controllers ever made; they’re not made for adults with bigger hands that’s for sure. But even my 10 year old, with his smaller hands, was becoming irritated by the frequent issues brought about from disconnections, ghost inputs and the sticks not actually doing what they’re meant to.

And so, when the chance to look at the HORI Minipad Pokemon-themed controller came up, he became my Guinee Pig. The HORI Minipad is designed for younger players after all, and the version we were sent featured a very bright and exceedingly awesome Pikachu design which we really liked as a Pokemon-loving family. It has offset analogue sticks akin to an Xbox controller, every standard Switch button you’d find on an official controller as well as extra turbo options to enable rapid presses of a button (or buttons) of your choosing. Visually it’s very appealing, and while those of you who find the latest Playstation controller to be the perfect size and shape will likely struggle with this, as previously mentioned this a smaller controller for smaller people with smaller hands. This review, therefore, is from the perspective of my 10 year old. 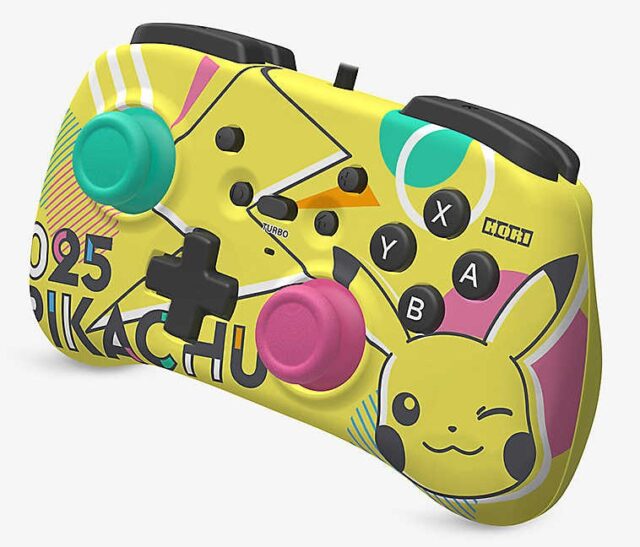 It took exactly one game of Splatoon 3 and one game of Fortnite for the verdict of “best controller ever” to be aired. To put that into some kind of context, that basically meant he preferred it to the standard Switch Joy-cons that he’d been getting frustrated with. A little more digging and more details helpfully emerged, the most notable being the accuracy of the controller inputs. Stick movements were predictable and consistent, and the larger stick motion meant he could be more precise with his playing without the instant large movements in-game often put forward by the Joy-con. The USB connection also meant that inputs were instant, and having started to experience some input lag from the Joy-cons this was a really big plus.

The buttons themselves were easy to hit as well; the d-pad and main face buttons are the hard plastic that you’d expect, with the plus, minus, home, screenshot and turbo buttons being rubber instead. These are quite small, and possibly the only main gripe we had with this controller – not only are the buttons small, it’s also difficult to see which one is which. If you’re not used to the button layout of a Switch controller it can take a moment to catch the buttons in the right light to see the tiny indented icons on each one.

The turbo button is impressively easy to learn how to use, and does a great job. Holding down the turbo button and pressing any of the face or shoulder buttons turns on the turbo mode for that specific button. At this point holding down the button will give you repeated inputs automatically, at a rate of either 5, 10 or 20 presses per second (easily changed by holding the turbo button and flicking the right stick up or down). Got a weapon that only gives you one shot at a time? Forget about jabbing the shoot button as quickly as you can, just fire up the turbo feature and you’ve got yourself a rapid fire weapon instead. Awesome. You can even have it repeatedly press the button without needing to hold it down – another turbo + button press will enable auto press, and doing it again will turn it off. You can also disable turbo on the entire controller at once by holding turbo and pressing minus. It takes a few tries to get the hang of it, but before long you’ll be turning it on and off like a pro.

So a great looking controller, perfect for younger hands that’s well built and has that extra turbo feature for good measure. And the other great bit about this? It’s pretty cheap as well, available for around the £25 mark. That’s considerably less than an official Nintendo controller, and as such it’s a pretty decent punt if you’re looking for something for the smaller people in your life to get their hands on. As you can probably tell, this isn’t a difficult one to recommend. Very good indeed.