It’s always good to get hold of a Need for Speed game. There are so many sim racers out there that jumping into some fast and fun arcade action almost seems like an alien concept. But this is what Need for Speed Unbound does to an excellent degree, and while the online offerings are little lacklustre the single player campaign will push your skills to the limit and bring about some serious head scratching when deciding what to risk, when to upgrade your cars, and how to tune things up to make the perfect racing machine.

The most obvious thing you notice at first is the unusual mix of cartooney and realistic visuals. I wasn’t keen on this at first, with the generally pretty cars and environments being merged with cartooney smoke effects, sketched neon wings that pop out of your car when you do a big jump, and a more hand-drawn style to the characters. It takes some getting used to, and feels a little wrong at first, but after a while I started to find that this mix of styles gave the game a real identity, something unique that generally isn’t found elsewhere, and the feeling of drifting around a long corner with cel shaded smoke pouring from my tyres then leaping over a ramp alongside three other races each with different coloured and different styled wings suddenly sprouting… It looks really cool. If you want to slow things down a bit you can even see just how good this looks with the photo mode, which isn’t the most flexible that you’ll find in any racing game but gives you all the tools your need to take your own images and show off just how incredible this game can look in the right circumstances.

The structure of the game follows recent Need for Speed ideas, giving you a rogue-like approach to your racing. If that sounds like a weird combination, it all comes down to how much the police are interested. You’ll complete races across the city to earn money, nothing new or crazy there. After the early events of the game kick off you’re left with a slow, run-down car and no decent garage to speak of, so that money is needed to build your garage and cars back up so you can perform in regular events to earn the big bucks. The story itself is pretty standard and does little more than provide a narrative to guide you through your in-game days, but it at least gives context for why you’re out there racing in the first place. 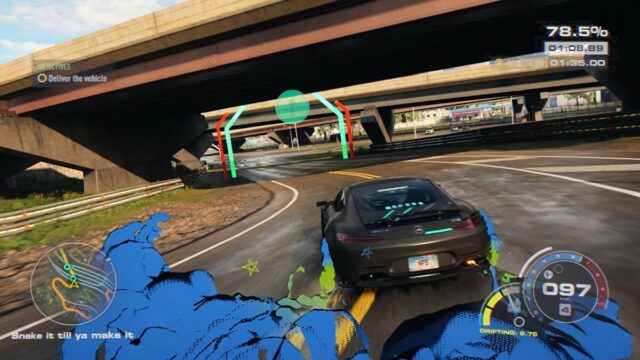 Every race you do though awards you not only money, but a certain amount of heat from the police. As this ramps up they get more and more tenatious in their chasing of you. After each event you need to decide whether to head back to your garage or hideout to bank the cash, or risk another event knowing that it’ll just wind up the cops even more. And if you’re thinking “it’s ok, I’ll just outrun them” you might want to think again – as they get more and more irritated they’ll start putting roadblocks up, bring more powerful cars to the chase or – just when you think you’ve got a chance to hide behind a building – the helicopter will make a showing. These police chases are incredibly tough; I’ve spent 20 minutes trying to evade them, getting to within a single car knowing where I am then all of a sudden make a mistake and they’re all back on me again. Sometimes it’s just worth accepting your fate and losing some of your winnings… frustrating, but that’s the risk you take. Your heat carries through into the night time events too so you’re not safe after the daytime races, but it does reset at the start of each day, so at least you can head out each morning with a clean slate.

There’s a great range of cars to get hold of, and plenty of customisation options in terms of body parts and designs. As long as you’ve got enough money you can soup them up as much as you want, as long as you keep your long term goals in the back of your mind – you need to make sure you’ve bought the right level of car in time for the next competition. Spend too much on upgrades and you’ll fall short when it matters. Tricky!

So while the storyline is average and the police chases are annoyingly brutal at times, I’ve had a great time on Need for Speed Unbound. The racing is fun, the city looks amazing as you fly through it at incredible speed and it’s just so nice to be able to throw your car around in a way that isn’t realistic, but is just flat out enjoyable. No precise braking points, no racing etiquette to worry about, just put your putdown, drift round some corners and punt a police car into a parked car when they get on your nerves. Really, really good.