Sail Forth is a lovely little open-world seafaring exploration game, which very timely arrived for the post-Christmas food coma.

The premise of the game is much akin to that of No Man’s Sky – there’s a loose plot, but generally, you’re going to be exploring and playing the game mostly your own way. Want to get into fights and be a pirate? You can. Want just to build big fleets and become a sea entrepreneur, also doable.

The game begins with you waking on a damaged boat, and on a quest to rebuild, equip a means to defend yourself and recruit a small crew. After that, it’s pretty much off to fend for yourself. The world is built with a cell-shaded style which reminded me greatly of Wind Waker. In fact, this seems to be the main draw of the game – lots of sailing, listening to ocean noise and just being at one with the environment.

You’ll encounter a number of quests as you go about your business and begin to map out the (procedurally generated) world. Fast travel becomes available but this does seem largely at odds with the main concept here, being to calmly explore. I think that your enjoyment is largely going to depend on how happy you are to do this, as the world does feel a bit empty outside of these moments, but then that’s kind of the point. 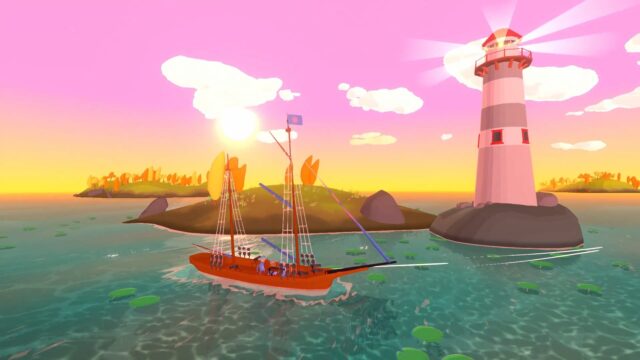 There’s no major ‘work’ to be done on the ship like in say, Sea of Thieves but you will need to pay some attention to the wind direction and pilot your boat accordingly. In fact, a more ‘realistic’ approach of sailing with the wind, rather than just taking a direct path is encouraged.

This can also make combat slightly more interesting, as being aware of when you can accelerate with the wind, and when you may be vulnerable is quite important. Weapon load outs and upgrades are available, as well as the placement on the ship is important depending on your strategy. It’s not super intricate, with an ‘aim and fire’ method outside of the initial setup, and sinking other ships is always good fun.

The characters help breathe a bit of life into the game too, although most of what they churn out feels a bit oddly written at points like they had some dialogue prepared and then looked to swap it out with pirate terminology. Still, the characters are cute, although it’s mostly just reading text which can be a bit tricky at points whilst you’re trying to do other things.

Ultimately, Sail Forth is just that – a game about sailing. It’s not too serious, it’s very chilled and is easy enough to pick up and play, whilst letting your mind wander. Lovely.