Can a top-down game be scary? I thought not. I was so, so wrong. Upon reading about the history of Darkwood, I learned that it was referred to as one of the scariest games on Steam. I can see why.

As you begin the prologue, you’re in a building. Looking around, a cone of vision moves as you look about, revealing objects in the house. There are some noises, a door creaks. You can move some objects about, and collect items. You can go outside, and you find someone, unconscious. The play shifts, and being interrogated now inside the house you are beaten. You finally manage to escape the room when you wake up from consciousness and open the door and OHMYGOD!

I won’t spoil any more. It’s scary. The scaring is done by the atmosphere. It’s intense. Everything is very heavily colour-washed. Whilst at its core it controls like a twin-stick shooter, it doesn’t play like one. Slow-paced, with stamina levels limiting your speed and attacks, you need to be careful and considered. The field of view that you have is limiting, obviously, but takes a while for your brain to register that just because you can see the entire screen like a top-down shooter, it doesn’t mean that you can see everything. It’s limiting, and this adds to the tension. It’s a clever way of encapsulating what is a restricted view in 3rd or first-person games, top-down. 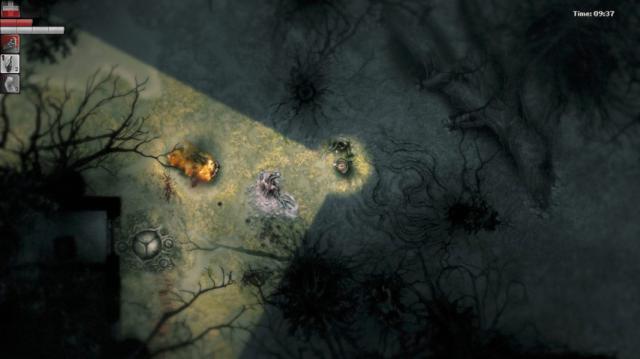 Items are key – this is very much a survival horror game. The day and night cycles are essential in making sure you always have something to worry about. At its core, you must explore during the day and get back to your house by the night before the terrors come for you. Should you die, you go back to your house but your items are gone. Making sure you’re safe then becomes really key. Things that you collect will help you barricade your house. Fuel is needed to run generators and traps can be made to slow down anything that does get in. And they will get in.

Daytime comes, assuming you survive but you’re never really safe. Your ultimate goal is to escape the woods, but there are more than enough things out there to kill you. Sometimes, you will come across some traders which might be able to boost you by offering something of value. The kicker is that everything really has some sort of value, so it very much depends on what and how you want to play. I enjoyed this aspect, as I basically wanted to always make sure I was kitted out with the best weapons I could get, to fight off the beasts. Maybe that way, it won’t be so scary?

Wrong. Darkwood really is terrifying. It’s gloomy, the sounds are piercing, the pace is methodical and deliberate. It’s challenging too, and can venture a bit too close to frustrating by way of the control scheme but it’s never too bad. What I found most tricky was the trial and error aspect. It is part and parcel of these sorts of games, but I always struggle a bit when it comes to potentially losing a cool item that I might need. I guess I just play it too safe. If only playing it safe meant it wasn’t so darn scary.