It’s just not tennis! Well, it is tennis actually, very much so. Tennis World Tour 2 features a number of high profile tennis players, and a variety of tennis to play. Well, a variety of ways to play tennis. It’s tennis, ok?

Tennis World Tour 2 tries to replicate the game but fails to match the excitement. Even if you’re not excited by watching tennis, playing a virtual version should be fun. Virtua Tennis is surely the gold standard in this respect, with a feeling of pace and power, with beautiful animation tying it all together. Even Namco Smash Court Tennis was great fun (before it became super realistic) – so where does Tennis World Tour 2 fit? Well, it looks realistic and plays terribly.

First impressions – it’s slow. Not only is it slow, but it’s also sluggish. Playing in London Stadium (Wimbledon but without the license) you’d expect some quick action. Sadly not. Oddly, there is a sprint and stamina mechanic here – the focus is definitely on realism, but sprinting just seems to make you a tad faster rather than making your players fully dash. They don’t even dive for shots! The stamina visibility isn’t really clear either, and this clarity hurts other aspects of the game.

Serving has a little bar to align, and then the button held at the apex of the ball throw. It seems hit and miss (no pun intended) to when the ball goes in if I add a bit of direction to it. Various shots similarly, too easily go out of bounds. I’m used to holding an angle and based on my position, the ball places – think Virtua Tennis’ straining your inputs to maximise power and direction. None here, my rallies ended after a few shots with my returns frequently ending up outside the lines.

I couldn’t quite figure out the power and timing mechanic when returning shots – different shots based on which face button you push. So I did a little test and this illustrates the core issue I have with Tennis World Tour 2 gameplay – if you push no button at all, your player will still swing.

You read that correctly. If you’re in swinging distance, your player swings. The timing then is at what part of the swing you push your button, and power dictated by holding and releasing. This is a total mess – it feels awful, and is confusing. It actively made me not want to play the game, and I couldn’t believe it at all I had to repeatedly test this to confirm. 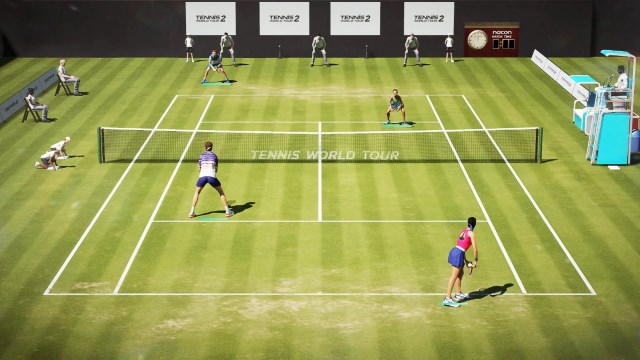 Something that is interesting but also very odd given the focus on realism, is a card mechanic. Buying card packs with in-game currency unlocks various buffs and debuts for your or your opponent. You ‘play’ these before each serve. It’s a head-scratcher, as on the one hand, it adds an interesting dynamic, on the other, it’s very odd given how focused this game is on realism. Maybe it needs more intricate observations, but I couldn’t quite figure the difference when I used the cards.

A selection of modes are available – online in fairness seems to work very well. Tournaments, exhibitions, career mode feature all as you’d expect. Career has you create your own character which always seemed to come out looking some like horrible goblin monster. I could not find any combination that looked remotely human.

Speaking of which, Federer and Nadal feature on the cover and look the best by a mile. I’m not very familiar with tennis players, but I can tell you that Andy Murray isn’t in it. Maybe in the bonus character DLC? No, they are Marat Safin and Gustavo Kuerten. I don’t know who these are, so don’t take that as a complaint due to my tennis knowledge, but it would have been cooler to see the links of Steffi Graph, Boris Becker etc.

There are a number of official courts and some DLC ones also – these look pretty decent. I particularly liked the impact of the players on courts, on different types all sorts of markings are left as players move about. Sometimes on clay, no mark was left, which left some interesting patterns but maybe that’s due to stamina, heavy-footedness (is that a thing) or pace.

There aren’t many tennis games about, so if you desperately wanted one, I guess this is up there in terms of recommendation. However, I’m just not convinced that it’s very good, especially considering the pedigree and inspiration of games before it.