As a teenager I used to love game books, those books that didn’t just run from the beginning to the end but instead asked you to make your own choices, work out what to do in different situations, and see the story adapt and change around those decisions that you made. The concept wasn’t anything new or unique; even back in the 80s computer games were offering up interactive fiction, text adventure games and pointy clicky adventures that also gave you different routes depending on the actions you’d chosen to take previously. This has been taken even further in recent years, with the likes of Telltale Games producing amazing series such as The Walking Dead (“Clementine will remember that…”) and Back to the Future, while Life is Strange stepped up the story telling another notch with an entirely original set of stories. But as with so much modern technology, sometimes it feels good to go back to something physical, an actual adventure book that tells you which page to turn to, which chapter to find next, and still holds you accountable for deciding not to pick up that torch you found before setting out into the woods. Over the past week that’s exactly what we’ve been doing having been given an early look at ALBA, a post-apocalyptic adventure book with a serious amount of variety and replayability.

There’s a huge chunk of mystery in ALBA. Before the opening sentence is done we know there’s somewhere called the Old World, and that you’ve come from living in a vault into this new adventure. Before much longer we realise that we’re about 100 years into the future, after a huge war has been and gone, leaving an unknown world in its wake. Soon after you learn more about who “you” are in the story, and what you’re doing sailing for over 20 days to reach a certain spot of land. But these gaps are left for you to fill in yourself, to form those assumptions or ideas of what might’ve happened during the preceding century. Some of those thoughts will get turned round as the story progresses, but others are left unanswered leaving the element of uncertainty that the plot encourages. It’s not a bad thing at all, and fits the feel of what you’re going through really nicely. 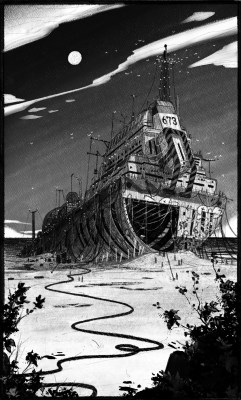 I won’t speak much of the ongoing plot for obvious reasons, but it doesn’t take long to realise what the main focus of the book will be, and it’s probably not what you initially think. There are several twists and turns throughout this, each making you second guess whether the ideas you’re having and the decisions you’re making are the right ones, and as your character sheets start filling up with various inventory items and skills, and more notably certain others remain empty and unclaimed leaving you wondering how you missed them, or how important it’ll be that you didn’t make certain selections before setting out.

But the emphasis here is very much in the exploration; the book is clear in that you won’t get killed as a result of your choices, although your paths could vary considerably depending on the choices you take. I’ve run this through once in total, and a couple more times for shorter periods of time, and it’s surprising how different the routes end up being. You’ll still often visit the same places, but that doesn’t mean you can do the same things each time. You might need to have certain items, or specific skills before choosing a certain path. At the point where you have four choices, but only two of them are available to you because of things you did or didn’t do previously, it makes you all the more eager to go back and try again after you reach your ending.

Each of the locations you’ll visit are accompanied by wonderful sketches of how they look, bringing to life the run down state of the world after the last 100 years. The detail in the explanations are great as well, and like all good books fill your mind with vivid visions of where you are and what’s surrounding you. You might even revisit some places later on, offering more chances to explore (or more chances to screw up) and this is all built into the story in a way that feels natural and right.

ALBA was the first adventure book I’ve read in years, and reminded me exactly why I used to love them so much. The agony of the decisions, the wonder of what might’ve been down a different path, the great feeling of being able to carry out a certain instruction because you did make the right choice, it’s all here. With this launching very soon on Kickstarter I’d encourage anyone who has fond memories of this kind of book to take a look and support the campaign, and if you’re just after something with a bit of a Fallout vibe to it but away from the screen, this will be right up your alley as well.