If you’re short on hilarity in your life, our previous review of Moving Out should have given you a good idea of how to have some incredible fun with some family or friends. But even that amazing comedy gold ran its course by the end of the main game; something new was needed, something fresh with new ideas, new mechanics and new ways to play. Step forward the amazing Movers in Paradise DLC, giving you some brand new packing chaos in a series of tropical and interesting locations.

This is much more than just a few more levels. You’ve now got ladders to navigate, pulleys and levers to use to solve puzzles and allow better packing, animals like crabs that grab your stuff and drag it into the sea, and some treasure hunting inside caves and temples for that added dash of Indiana Jones. All the while you’re trying to throw, carry, pivoooooot and shift furniture and other possessions around without breaking things, completing some objectives and generally working as a semi-competent team to get everything done within a time limit. 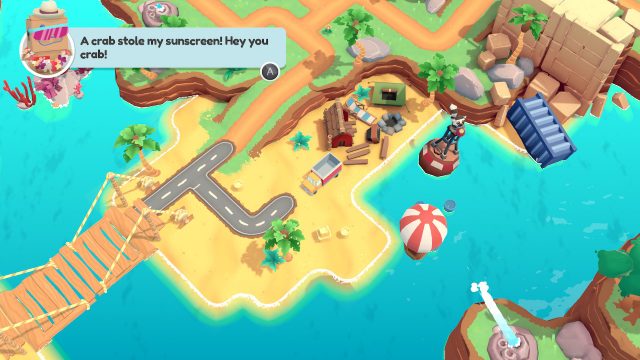 There’s a lot of new stuff going on here, but it never becomes confusing or daunting, it’s just a hefty pile of fresh ideas. Not having to learn the game itself helps though, so you can focus on your muscle memory doing its thing while you work out how to use the various new mechanics to help you along the way. But the great thing about this, as indeed it was about the original, is that there’s no single right way to complete a level. There might be one way that’s more efficient, or damages less of the surrounding scenery, but there’s loads of ways to play this, and being a game that can easily be worked out by 6 year olds means there’s a lot of family fun on offer.

And the best bit? It’s only a few quid – £6 at the moment – which is an absolute bargain for all the gaming you get.