Clid the Snail is a twin-stick shooter, but in a twist from the fast-paced chaos one might be used to, you play a snail. So it’s slow.

Well yes, sort of. It’s more deliberately paced – Clid is a mutated snail who is more like a human (as in arms, legs etc.) and outside of a dodge roll, can’t move too quickly. His inference for playing around and building weapons leads to him being ostracised from his home into the outside world.

The outside world is a post-apocalyptic one. But, being a snail (albeit mutated), Clid is tiny. So this world is like a decrepit Micro Machines’ style environment, as leftover human debris is utilised for bases and homes.

Clid encounters different NPCs who talk about their desires to rebuild the wild, and quickly, the base weapon you have becomes powered up and a bit meatier. The deliberate slowness of Clid helps add some weight to these guns and the impact they give out, but it’s all a bit hampered by the darkness of the levels. It’s post-apocalyptic and indeed, feels every bit of it, with varying shades of dank greys and browns. The lighting effects of some weapons brighten it up a little bit, but I pretty much used the weapon you get at the start the whole way through. 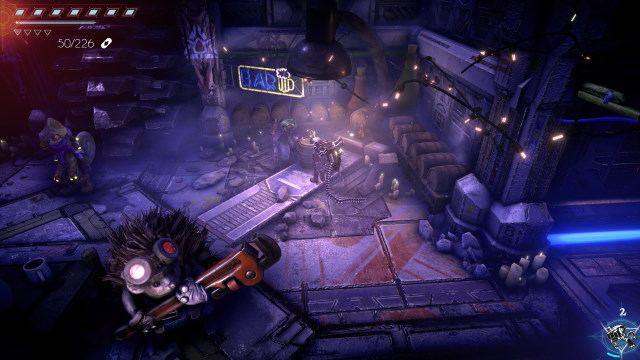 These visuals don’t help the repetitive gameplay. Most enemies dart directly at you, which feels like a space-invader type slow-motion attack pattern. The base approach for taking care of business is to walk one way and fire the other to keep them at bay. A few enemies do mix this up a little bit, but it’s not a thinking person’s shooter.

Clid is very much A to B, which I’m ok with, but sadly there’s a really limited amount of saves as you go, so death becomes very punishing as you’re forced to redo fairly long sections at points.

Thankfully, the repetition of Clid is short-lived; I finished the game in about four-ish hours. There wasn’t a huge amount that wanted me to replay it, I was sort of hoping there might be a bit more ‘snail stuff’ to do, but Clid is a snail. What do snails do? Maybe some slime attacks? It felt to me that maybe a different mutated creature might have been a better option for this, but that wouldn’t necessarily solve the other issues Clid has.