Deathloop is the latest new IP from Arkane and arguably the biggest Playstation 5 exclusive this generation so far. It’s many things; first-person shooter, murder mystery, time-travelling adventure, stealth game. And whilst it doesn’t do them all perfectly, I very much enjoyed it.

Deathloop begins with you waking up on a beach, not really sure of how you got there. Words appear floating around you, giving you hints – it’s not clear how or why they are there, but you learn to collect a gun and to collect a ‘hackimajig’ which lets you hack things (security cameras, doors, etc.). An extended tutorial takes you through the premise of the game, overlaid with your protagonist discovering the world as you do.

You play as Colt, and you learn you are in the ‘loop’. The loop is the same day, over and over again. However, you’ve been a naughty boy and everyone is out to kill you. Your self-assigned mission is to break the loop. To do this, you must kill all 8 visionaries – special characters within the loop all in a single day. If you die, you start the day again.

Sounds frustrating, and it is at first. The tutorial explains the basic mechanics to you. You’re on an island, and the island is divided into four ‘levels’ or parts, each with many dedicated entry and exit points. The day is divided into four times (morning, noon, afternoon, and night) and you can visit any at any time, but time progresses in order. Each timezone, the level changes slightly – given you essentially four times four variants to explore to solve the mystery.

You start with a single lead. This lead explains these mechanics and you learn that going to a level at a certain time will mean it’s impacted by what happened earlier. The same events happen at the same time each day. For example, in the tutorial, you visit your apartment at the end of the day, to find it’s been ransacked. The safe has been opened, and you’ve learned the code, so you visit it the next morning and can unlock it before it gets tossed. This is your first piece of essential information – your knowledge survives the loop. Nothing else does.

This is until you infuse things. Each kill of an Eternalist (the NPCs trying to kill you) gives you a little Residuum. You can also collect this from glowing objects. Infusing then spends Residuum and allows you to keep objects across loops. These can be weapons, character upgrades (such as double jump, although you always start with a double jump), weapon upgrades (quicker reload, bullet penetration), and slabs. 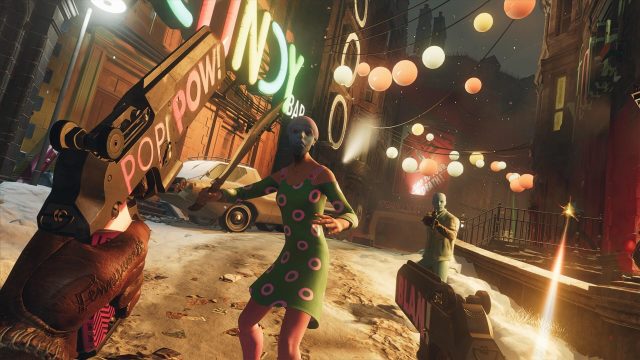 Slabs are special powers that some (not all) Visionaries have. My favourite was invisibility, which is only available for short spells at a time but really helped my stealth-favoured build. Kill a Visionary the next day, and they drop the slab again – this time, it’s an upgrade for the slab. One gave my invisibility the ‘Ghost’ upgrade, meaning I could stay standing and not lose power – so infinite invisibility until I moved. Helpfully you can look around and reload, so this made the game a lot easier.

Like many roguelikes, the longer you play, the more you infuse, and the more powerful you become. Deathloop is pretty hard at first – there are no difficulty settings and very limited accessibility options. But towards the end of the game I felt very powerful, my ‘invisible violent’ build helped, as I would stand still, with a gun capable of firing stealth single shots that penetrated people’s heads at range (although each time you fire, you do become visible again). All of the various slabs (you can only have two at a time) and their upgrades (also two at a time) mean you can really develop your own preferred playstyle for making your way through the loop.

Sadly for me, stealth didn’t seem as viable an option as it has been in Arkane’s other games, specifically Dishonoured which also has an ability system. The Eternalists have a really strange vision cone, sometimes it’s very clever at spotting you, others they’ll be completely oblivious. Stealth is important to a degree, as some of your leads and clues will come from overhearing conversations between them – they happen in the world at different times in different locations, but I almost always ended up in shootouts. Towards the end of the game, as I got the appropriate abilities I wanted, stealth become a lot more viable.

The shooting isn’t great. It’s not terrible, but if Deathloop just had shooting in it, it wouldn’t win any prizes. It’s functional – with (by default) a very heavy aim snap. This adds some ease to the game, but also I needed it, as there’s a strange dead zone on aim-acceleration, which is really noticeable when trying to headshot people far away, as you move your stick to the left a bit and it overshoots, then right a bit and it overshoots. This is worse in crowded areas where it will snap across towards the other person. Frustrating. It lacks the finesse of more established shooters, but aside from occasionally being annoying, it didn’t detract from my overall enjoyment.

There are a couple of other mechanics worth mentioning. First, and this may seem obvious, but things you do in one level/time combination can impact others later in the day. This can involve preventing or creating things to happen (these are all scripted triggers rather than dynamic, but for example, stopping a building from burning down so you can explore it later) or ensuring that Visionaries will appear in a different place later. There are 8 to kill remember, and you can only visit 4 level/time combinations in a day.

The other is Juliana. Juliana is Colt’s main adversary/contact. There’s a lot of voice acting in Deathloop, and it is all absolutely fantastic. At the start of each level, Colt will be in radio contact with Juliana – and every dialogue is brilliant. Colt is trying to unpick what is going on, Juliana is half teasing, half helping… or is she? Colt doesn’t know, the banter is absolutely fantastic and I expect it will win many awards for this. Their relationship develops, with each loop and time/level combination unravelling more of their relationship – it reminded me of how the story drip-feeds through Hades. 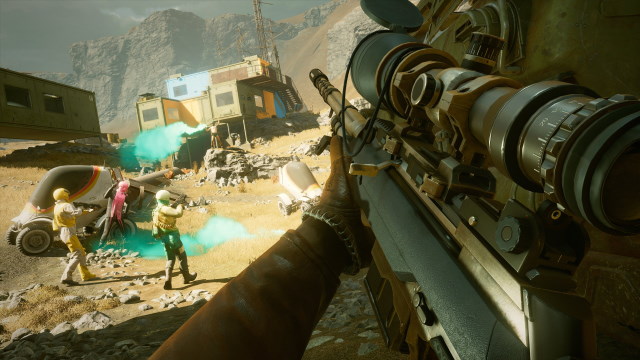 There is a lot of story here too. Annoyingly (for me), a lot of it is told through text. There is a lot of text – the game is very eager to explain everything, both through tooltips, pop-up menus, help menus, overlays. Later in the game, mid-combat you may still encounter something that the game tells you what you have to do, and you have to push Start to clear it. The only trouble is depending on how you’re playing, pushing Start won’t pause the game. So you die (or fight with an overlay on the screen). The reason for this is you may not be playing in Offline mode.

The game has three modes – offline (single-player mode), friends only, and open. The difference? Aside from not being able to pause in the latter two, is that your game can be invaded. At any point, Juliana can invade your game. This means, there is someone with powerful slabs (like you) trying to kill you. In offline mode, this is AI. In friends or open play, this is a human. Juliana invading does two things. Firstly, increases the chances of you dying, as she’s the toughest opponent in the game, and secondly, locks your exit tunnels, which you’ll need to hack an antenna to reopen.

This adds a level of tension and threat, especially as you can only infuse between levels, and stand to lose everything if you die. It’s annoying, but the good kind, unless online people jump in your game. You’re then at the mercy of their connections (or yours) and from my experience, the latency was hit or miss. At times, things got stuttery and it did ruin the experience. Switch to offline, problem solved. The flip side is that you can play as Juliana in a separate mode, and invade other people’s games. From my experience, however, this resulted in a lot of antenna camping.

For the most part, I very much enjoyed Deathloop. I felt it a bit of a shame that with all the really great dialogue, you don’t necessarily need it to move forward. For example, you get to a bit where two Eternalists are talking, and you’re spotted, so you kill them. The game records the clue they would have given you, and it’s on to the next. I didn’t especially mind this but it rewards more of a run and gun play style which is not the strength of the game. Some of the ways to get to the Visionaries are quite cool too, but if you get spotted, it can blow the whole thing and you’re just gunning down everyone anyway – which happened more often and not despite the attempts at stealth. Finally, there is constantly stuff to read. It’s a personal hate of mine – having a lot to read in games, and a lot of material in Deathloop is written at a high level, so requires a lot of digesting sometimes to make sense of the clue. But the game then gives you another tooltip afterwards of what this translate to in ‘real world terms’ so wasn’t necessary. I found myself skipping big realms of text and just using the clues, which isn’t really in the spirit of it.

Is it the first must-have exclusive for Playstation 5? Well, it’s one of the few, so in that sense yes. It’s not the second-coming of games, as some of the press have regarded it, but I played it in a handful of very long sittings, and I’ll rarely do that to pure single-player games these days, so on that basis, I would heartily recommend it, despite my qualms.