Every year, we get an MX Motocross game and a Monster Energy Supercross game from Milestone. Each year they make little tweaks, sometimes better, sometimes worse, and each year I have the same complaint: no proper tutorial (outside of a practice race that pauses to tell you to push the clutch – but what does that do!!?)

Well, hold on to your Monster Energy branded seats. Supercross 5… has a tutorial!! A proper one!!! And it’s glorious! It tells you how to properly weight your bike at the start, and how to tackle the whoops section quickly. it *explains* it!!

It feels a bit like an award for finishing last – that the game has a tutorial – but it’s welcomed, and coupled with some refinements to the bike handling this year, it’s a really solid entry. You see, Supercross tracks are typically very tight and in stadiums, so tight turns, high acceleration and jumping is all part of the game. It is still a bit twitchy for my liking personally, but after a while when you find your flow, it’s great.

Speaking of flow, further support from the game gives you projected lines to take over jumps in order to best aid your lap times. This ‘flow’ is important as (one of) the fastest routes around the track, and some additional assist options give you some help with rider weight and handling jump distance to try and let you make the most of this flow. What it amounts to is the most accessible Monster Energy game for some time. 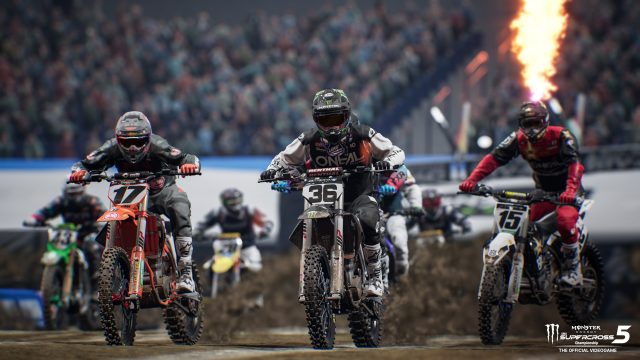 The career and season mode has been given an improvement too. Again, it’s all nicely explained, and fully customisable in terms of components (full qualifying, short qualifying etc.) and race length. You customise your rider, pick a team, get sponsors, do challenges: all of the good stuff you’d expect from a career mode. You can also upgrade your rider too now by earning points during races to spend to improve cornering, jumping etc. You also need to manage rider injuries and get the opportunity to partake in smaller limited-tries challenges to earn more points and further enhance your potential. One thing I did like are the journal challenges – these exist in the back end and track everything you do, giving you points for it which you can use to upgrade. It’s a nice little meta-system that makes you feel like you’re being rewarded for everything – trying a silly jump? Points for you.

The career mode is the primary option here really, and where you’ll spend most of your, err, career. At least for solo play, as there is online multiplayer to hand which seems to work pretty well although it’s a bit bare-bones by today’s standards of online play – you pick multiplayer, pick a room, hope it’s not got too long to go until it finishes, wait till the end and hope everyone doesn’t quit.

Track creation is back, and like everything else is similarly improved – it feels to me that the real benefit of the next (current?) gen console power is being felt now with painful load times slimmed right down and capacity to handle more going on at a reasonable pace (solid 60, mmm…) is well received. Still, though, the character creation is pretty weak – hardly a really big deal for this type of game but does impact the presentation slightly.

Also back is the free-roaming mode, and with the slightly tweaked handling (and explanation!) it’s nice to be able to blast about in it and take part in some of the more open-world events. Between the career races now there are challenge events to do here too, things like collect all the letters (a la SKATE from Tony Hawk) which is quite good fun to hunt down over a time limit)

So, Monster Energy Supercross 5 may have caught lightning in a bottle here. All the components click, it works, it’s fun, it looks great. So what’s wrong? Honestly, nothing really. I think there’s some refining to do with the handling which I think would make it a bit of a barrier to newcomers who would be quickly put off from having to negotiate that fiddly learning curve to grasp the nuances of it. Whilst not a sim, Excitebike 64 still stands out to me as the benchmark of fun, ‘realism’ and accessibility for MX or SX bike games. The MX v ATV games have also had a pretty good stab in their early efforts, and there’s a new one coming out in a few months so the question for Monster Energy is can it hold on to its hardcore fans? Guess we will see.