I’ve never played Commandos 2 – one of the most talked-about strategy games of my youth. I’ve known about it – I knew it was hard, and it was similar to more recent games Shadow Tactics: Blades of the Shogun and Desperados 3, games which I have very, very much enjoyed. So it’s with a lot of excitement then that I played Commandos 2 HD Remaster and….

Well, it wasn’t completely what I was expecting. I guess my first observation is that while this is an old game, it definitely feels like an old game. Visuals first, this is a remaster, so obviously it looks much better. Does it look good? It looks ok. This is a remaster, not a remake, but I was hoping for a bit more polish applied. The menus look old, and a menu does not make a game, but this carries over to the UI and most visuals throughout.

Commandos 2 is a game where you have a handful of characters, each one a different set of skills. The Green Beret and Thief can shimmy across ropes, the Thief can open lockboxes, and the Sapper can tie up Nazis once punched. The idea is that each member of your team has an important and strategic part to play in the completion of each level.

The goals are laid out in front of you quite clearly, with an overview of the map – a key ability is that of being able to see enemy view cones and then be able to approach as required. This is a puzzle, and various indicators used in Shadow Tactics and Desperados (such as crouch to avoid the second tier of the viewpoint and a timer that ticks up as you are identified) are not utilised here. Standing or crawling are your options, and when you’re spotted it’s not clear how alert the baddies are of your presence. 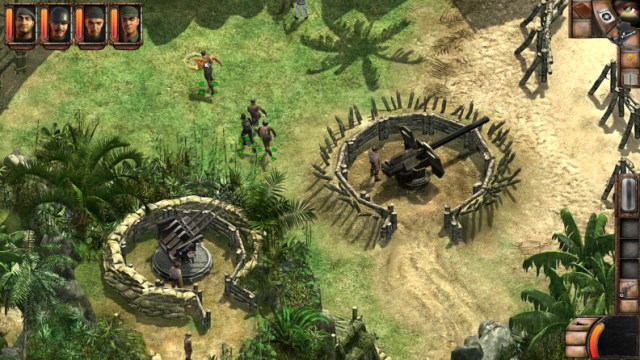 Similarly, options like disguises can be used when stolen from the enemy – each has a timer for how long it lasts for, and certain things make you suspicious to guards. I never really felt this was clear and would opt to just not wear on at all for all the good it did. My biggest opponent, however, became the bugs.

There are a fair few nestled in the HD remaster of Commandos 2. Some Googling reveals that I’m not alone in this finding and that some bugs appear that weren’t even in the original. You’ll encounter them quickly too, as the very first tutorial has you disarming mines. The guides on what to do are scarce (another online search reveals the manual is helpful…. if you have one), but as you approach it becomes clear. The issue is that being close, and the mine going off in your face as the automated disarm takes place is a blurred line. It’s confusing and I’d seemingly randomly walk past a mine and have myself blown up, yet another go has me sit close to it, enough to disarm safely.

There’s no doubt that there’s a lot on offer here. With all of the abilities, each character has a finite inventory, with all items taking up varying space – so some management is required. I felt like there’s almost a bit of an RPG element here, balancing encumbrance (by way of inventory size) with usefulness. Cigarettes helpfully are great for luring enemies off their paths for example, whereas other items I’ve yet to find a consistently practical use for. Whilst serviceable, there’s not really been many accommodations made for controller support on console both in terms of control or inventory management, which makes it feel a bit fumble.

It’s not full price, so that works in its favour here. Is it the best use of £15 to spend? I really, really enjoyed the aforementioned Shadow Tactics and Desperados, but as much as I tried I just couldn’t really bring myself to even like Commandos 2 that much. My advice would therefore be to pick up of them up in the sale, or if you already have them, play them again on the higher difficulties.