TL;DR: Monster Truck Championship is not perfect technically, but I had a whole load of fun with it and think it’s awesome.

I start with this because I was expecting this to be terrible, and it isn’t. I think that’s important because this shouldn’t be overlooked. There aren’t many games about monster trucks.

And that’s a shame. When I was little, I wanted to drive a monster truck. Even today, every time I am stuck in traffic I think about what it would be like to have one, and just drive over all the cars. I’ve seen monster trucks do the drag races, and the stunt shows, but I don’t really ever recall a ‘monster truck’ program. How do I know about Gravedigger? Well, the good news is that Monster Truck Championship allows you to live out all of your monster truck fantasies.

My first surprise is that this is a simulation. Manual gears are an option, you can turn ABS off, and even have a cockpit view if you want the real deal. There’s a comprehensive training section which takes you through how to command the truck and do all the tricks. Did you know that monster trucks have both front and rear-wheel steering? I didn’t. Turns out it’s bloody useful.

This affords you with a surprising level of control. Not just for steering, but for drifting, and all the various tricks. How do you do tricks in a monster truck, you ask? Well, there are a couple of key factors. Firstly, the speed of which you approach obstacles, which mostly function as triggers to launch your vehicle in various ways. Too fast, you’ll overshoot, spin or twist. Too slow, not enough velocity. Second, position on these obstacles. If you want to do a wall flip, you’ll want to be straight (until you start getting into advanced tricks). A bicycle requires you to have both wheels on one side over a ramp, you tilt your truck.

This brings us to the final aspect of trick management – control. Control of throttle, brake, and balance by controlling the front and rear wheels. Reversing, then slamming on the gas causes a wheelie – control of gas and brake is then required to maintain the balance. There’s a combo system for the freestyle and demolition events (the latter of which grants extra time for each object damaged). You need to try and link together tricks, with the multiplier increasing by one for each trick. It’s addictive. There’s a trophy/achievement for a x30 combo. This is very hard. 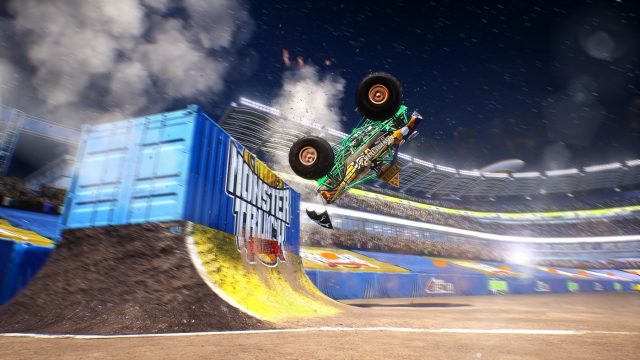 There’s a persistent cash/upgrade system across your career, which spans a number of events mixing racing, drag (a monster truck spring to the finish across a very simple course) and the aforementioned freestyle (tricks) and demolition (tricks and smashing). Upgrading your car increases speed, brakes, acceleration etc. There’s a huge amount of customisation too, colours and add-ons for your vehicle like cooler looking exhausts – and some themed logos such as ‘Sergeant Chaos’ if you want to name your truck. I haven’t found any officially licensed ones yet which is a bit of a shame, although I am holding off browsing the later ones so I don’t spoil myself. A sign that you want to resist the little surprises in a game until they natively appear is a good sign that you’re enjoying it.

A sponsorship system overlays the fairly linear progression through championships too. The objectives are surprisingly not always easy, usually including a few things such as win one race, and do a bicycle for 6 seconds. You’ll want to make sure that the next event you pick has the required elements to achieve these – I enjoyed this aspect. You also select engineers to hire for your team too, each giving certain buffs or debuffs, such as less income but at the benefit of quicker gear changes.

Let’s touch on gear changes at the moment. I mentioned this is a sim – if you want, you can turn off ABS, have manual gears including clutch control and force an inside cockpit view. It’s not easy. In a freestyle mode, some jumps and flips will trigger a highlight cam (you can turn this off) but as you’re jumping and flipping in cockpit view…. well it’s both cool, and sickening.

If I’m being picky, there could be a bit more variation for the career mode. It does feel a bit repetitive but I’m still enjoying it and am on the final few series now. Performance is good but frames start dropping in the races with many cars on screen although hopefully, this resolves itself for the next generation of consoles.

If you’ve been waiting for a slightly different racer or a fun monster truck game that’s actually decent, look no further. It’s excellent.